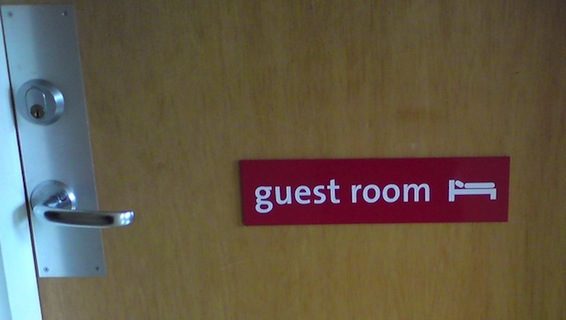 Several weeks ago I decided to close guest posts on State of Search for the time being. Many thought it was just because I was getting so many bad requests for guest posts. It was however much more than that. In my view guest posting had become the newest link building tactic and not in a good way, it has become the equivalent of link exchange request.

And sooner or later things would go ‘wrong’ there. As I said a month ago: “The low quality content is hurting sites, and will be penalised by Google in the end I’m sure.”. It looks like that time is coming sooner than later. Though it isn’t directly low quality content which draws the attention, it’s the links.

Two signals point to that, first Matt Cutts who started tweeting about a new Penguin Update (‘Penguin 2.0’) and made a video (below) about what to expect in the next few months in terms of SEO in which he points at the upcoming update, which probably will hurt a lot of sites. Most likely this is the update Cutts talked about in San Francisco last year when he said “You don’t want the next Penguin update, the engineers have been working hard”.

That Penguin Update is coming and might just be focussing on guest posts a lot. A signal of that seems to come from E-Consultancy in the past few days. According to a tweet that went out towards Matt Cutts “author links in guest blog bios on Econsultancy have been flagged by Google.”. It turned out this was about a link on which E-Consultancy themselves reported before.

First the things Cutts was talking about. As said he tweeted, in response to questions, that a new update was coming: 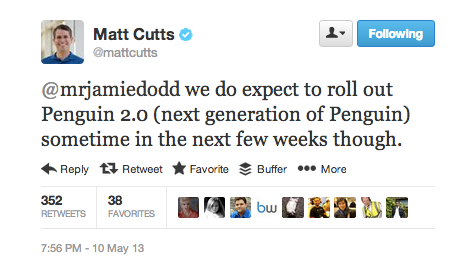 And then the video came:

So today all of a sudden rumours started about E-Consultancy links getting ‘flagged’ as being bad links. With the many rumours going around this days it was hard at first to believe it, but after this tweet people had some attention for it and it seemed to be true. In the end it turned out to be something which E-Consultancy themselves reported on before. 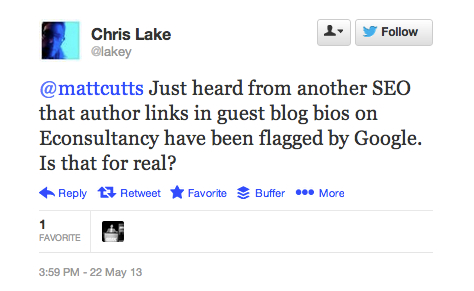 To be clear, the links talked about here are those in the bio’s:

On State of Search that would be these:

What does this mean?

What does this mean? Does this mean E-Consultancy is in big trouble and their links are now ‘poisoned’? Not exactly. E-Consultancy uses a lot of guest posts on their site. Which means they themselves will be targeted by ‘link builders’ a lot as well. And they have pointed that out themselves several times as well.

The ‘problem’ could be that if one of those link builders is doing a ‘heavy job’, getting a lot of links in a short amount of time, that might alert Google and have them check and maybe even flag (some of) those links. This seems to have happened to them.

These links can therefore be flagged on many sites, including E-consultancy’s. This does not make E-Consultancy a bad site all of a sudden. But let’s face it: you don’t want links coming from your site being flagged.

We don’t know if Penguin 2.0 will be going in this direction, but IF Google indeed is going there (things do seem to point towards that) it means this will have consequences. Sites like E-Consultancy (or ourselves for example) will become more careful because they don’t want to be ‘associated’ with these type of ‘bad’ links. It will hurt them in the end as well. On the other side there’s the ones doing the guest posting. Most probably they will have to reconsider their tactics. Agressive link building has never been a good thing which includes aggressive guest posting (what happened here).

It still believe that the tactic of guest posting as a link building tactic is indeed be up for a massive ride in the near future, towards the ‘bad’ side. SEO’s should already be looking at different methods than guest posting.