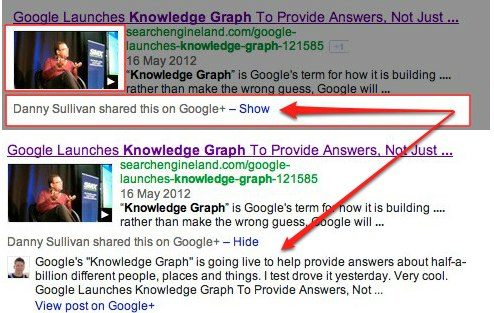 Google wants Google+ to be a succes, after all it is the idea that everything Google does moves over to the Google+ infrastructure. That means the more people use it, the better. Also because that is the data that Google gathers to then give us back information in for example the search results which is tailored to our needs.

As Maile Ohye explained in a video earlier this week one thing which is important here is trust. As searchers we want to see what the people we trust are sharing. As a website owner we want people with authority to share our content. And in search all the identity and trust levels are integrated.

Today I did a search on Google and found the result below:

There are two things interesting here. One is the thumnail of a video which is embedded in the post. That is something which has been spotted more (including by Alex Moss who showed us we ourselves ranked like that and that it indeed is supported by Google, but I will get back to that in another post.

Also very interesting however is what is below the snippet. We have seen the ‘shared by’ many times before, but here is one which has no image at first, but has a “show” link next to it. Here’s is what happens if you click on that link: 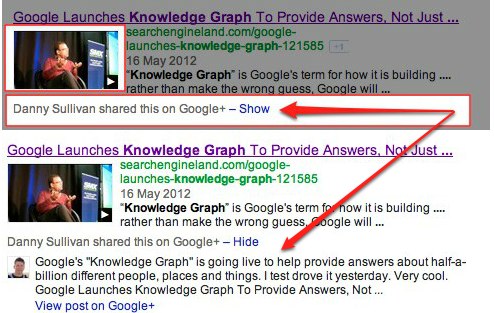 The actual update Danny Sullivan did on Google+ now also has a snippet, and when folded open it also shows Danny’s image there, in a smaller format than before. It might be connected to the update Google did last week where it showed how to connect websites and Google+ accounts.

This leads to a few conclusions:

Google is putting more emphasis on the Google+ updates about a specific post. This will give more trust to the actual article, but it also gives Google+ yet another push. As a marketer it now becomes even more interesting to think about what to share on Google+ and who to have in your circles who can share your content.