As we reach this time of year, moving from one year into the next, people inevitably do two things (and I’m not talking about making and then breaking resolutions!). The first thing they do is to look back at what’s passed to see what they can learn from it. The second, is to make predictions about what will happen next. We all do it, particularly in our digital industry, with varying degrees of success. But what would you say if I told you that there was a way to predict the future and never be wrong?

This was the crux of the final session at Bing Ads Next, held late last year at Microsoft’s offices in Redmond, WA. The presenter was James Whittaker, an alumnus of technology companies past and present (find out more about him on his website here or follow him on Twitter). He started off with a warning – if you look into the future and see the present, you’re going to end up in the past. Change is guaranteed, so we had better be ready for it! Here’s a summary of his session and some of my own thoughts.

How Do You Tell The Future?

To teach us how to tell the future, we went on a historical tour of folly and innovation. We learned that the same things *always* happen. 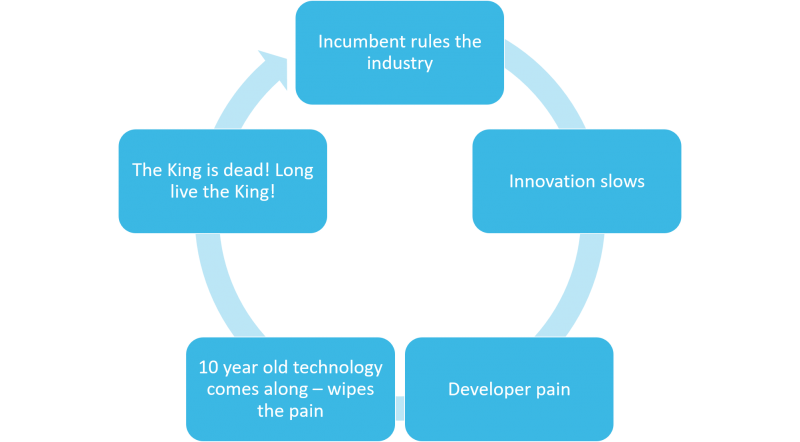 The irony in the above cycle is that once the new power has solved the problems caused by the incumbent they’ve dethroned, they themselves then become the source of slow innovation and developer pain. And so it continues. If you can spot who’s-who at a given point in time, particularly towards the end of cycle (which is where we are right now), it’s possible to figure out who or what will come next.

But don’t just take James’ or my word for it – let’s go on a quick whistle-stop tour of technology since the 1980s.

From the Eighties to Today

We begin with IBM and the era of mainframes and dumb terminals. 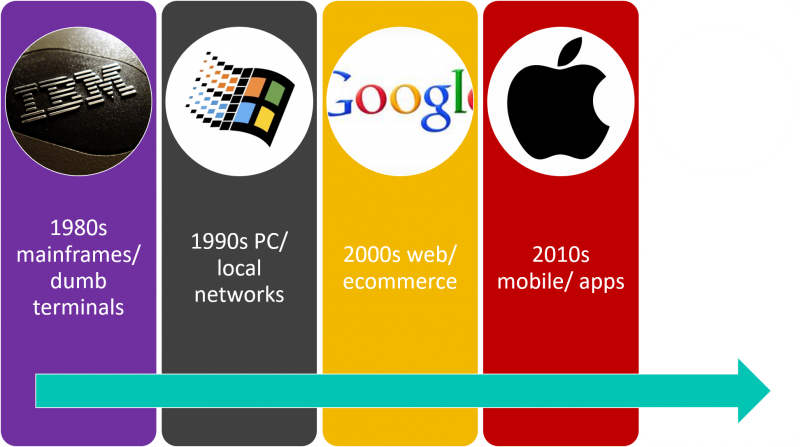 As much as we’ve joked about it being “the Year of Mobile” pretty much every year since 2010, we can’t argue that really it’s been the Decade of Mobile. 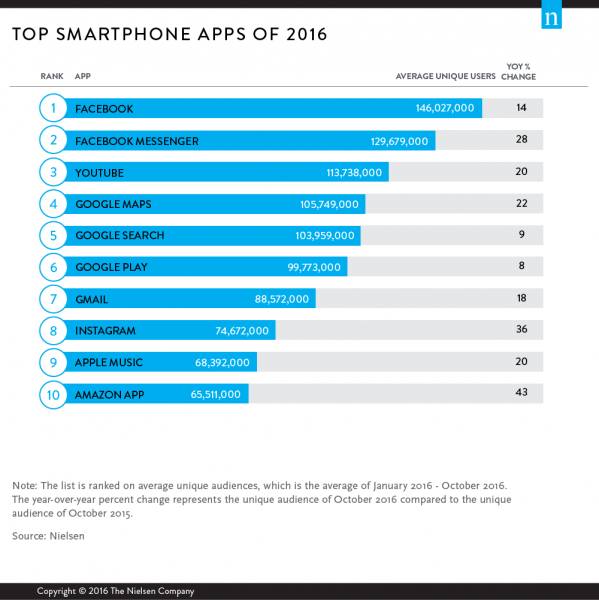 The big question is what technology is 10 years old right now that could be set to dethrone apps as the next big thing? There’s 3 main contenders.

Data – from little to big

Machine-oriented search – from human to machine

Reality – from separate to blended

Add all of this up and what do you get? The most likely scenario is that the dominant force in the next decade will be the Internet of Things (IoT) and Big Data 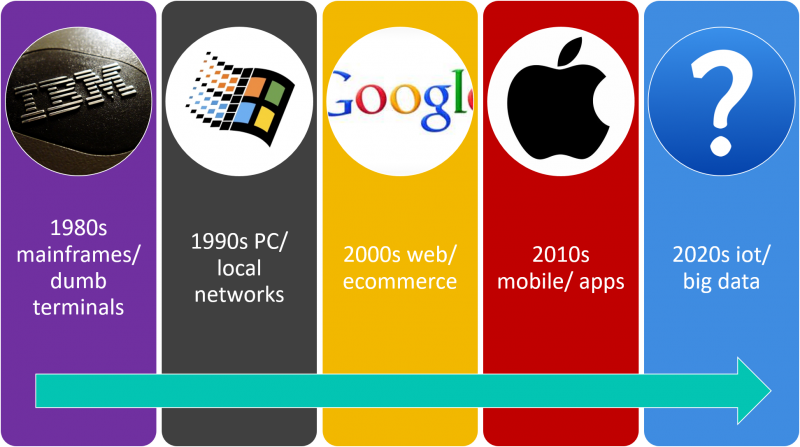 2020s – Adding Value through the IoT and Big Data

This is perhaps the key phrase in all of this. What is going to add value? We’ve already identified that the current situation of value being put in and not discovered is probably what’s going to cause the next big shift in consumer technology.

We’re already talking to our devices and getting them to handle things for us (Alexa, Cortana, Siri – with more on the way from companies like Samsung) and this will lead to an inevitable increase in bots taking over or automating things that we used to do ourselves. It might be ordering groceries, scheduling appointments, comparing and making recommendations. As a marketer, this is where things get really scary exciting. Why?

You can’t advertise to machines. So there’ll be no need for adverts. Machines aren’t going to be swayed by the use of marketing or psychology – they’ll rationally make the best choice after considering all of the available information. Machines won’t cry when they watch a John Lewis advert designed to manipulate your emotions. They don’t have any.

You can’t advertise to machines.

Marketers are going to need to find new ways to add value. It’ll become a game of reconnaissance and surveillance – how do we get the machines to choose us over our competitors?

Reducing the world to data

I mentioned before about how UI is going to become a lot less important. With the increase in voice technology and automation pre-empting our every need, the kinds of devices we will use on a daily basis will change. If we change the way we consume the data, we may no longer need the screens on our phones and for the times when we do need a screen, technology like HoloLens is going to rapidly decrease in size and become more affordable.

Think about it – with phones and screens the size they are, you need a massive battery to power it all day. If we did away with screens, you don’t need 75-80% of the battery. You could create a piece of tech just as powerful as the smartphone in your pocket that’s the size of your finger. It’s possible that technology could continue to get even smaller – while we’re rapidly reaching the limit of what we can do with silicon, meaning Moore’s Law will no longer apply, we may be able to find other ways to do more with less.

The challenge with reducing everything in the world to data is that once we do, we will be powerless without the help of machines – not good news for those worried about computers taking over the world – you either need to use a machine, or *be* a machine. But, because of the aforementioned lack of emotion, computers also lack bias. They’re fairer, smarter, and there’s still plenty we can do to leverage machines in ways we haven’t before.

For example we can use machines to create what we see, through 3D printing. The current generation of smartphones are better and faster than the supercomputers of 20 years ago – yet we still mapped the human genome with those machines. Now we’re moving on to mapping the human brain and we can understand what panic attacks look like, before they occur. What if we could do the same for depression and social anxiety, administering treatment as a prevention rather than a cure? Once we reduce cancer and aids to data what progress could we make? Already there’s promising feedback from the use of IBM’s Watson in relation to cancer treatment and from Microsoft, who are using two different approaches to bring biologists and computer scientists together to overcome the challenge.

Since we’re on a marketing site let’s tie this back to marketing – in this environment, how would we monetise? We’re already seeing signs of the current system of things not working as it should – Medium recently laid off a third of its staff for this very reason. The CEO of Medium stated,

“it’s clear that the broken system is ad-driven media on the internet. It simply doesn’t serve people. In fact, it’s not designed to.”

We currently monetise the online ecosystem in the below ways, but we don’t know how this should work with machines or whether these are even the right things to do. Increasingly we’re seeing a backlash against how we currently fund different elements of the Internet in the rise of ad-blockers, questions around the use of data within advertising and how intrusive advertising should be. 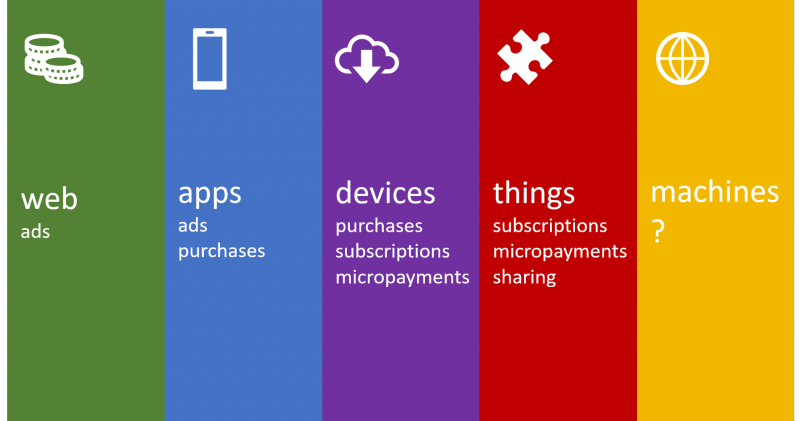 Personally, I accept ads and the invasion of privacy that comes with it as the price of a free Internet. On the other hand, I have no problem paying for the content I find value in – I pay for Netflix, I have other subscriptions to software and sites that I find useful and I also contribute to funding drives for different content that’s valuable to me, such as podcasts. Not everyone though, is willing or able to do this, so I suspect that with the rise of the machines we’ll see a huge change in the monetisation and marketing of the Internet as the value that’s added needs to be paid for in some way.

The key idea moving forward is that we will be living in a world where the people who inject the most value will be the ones who are the most successful, once we define exactly how that model should work, because it almost certainly won’t be ad-funded. We need to think beyond browsers and apps and do that alongside thinking about the data and how we can use it to add value. We need to do this quickly though as it’s quite likely that come 2018, the ship will have sailed on what/who the next big thing will be – developers will have made their choice and it’ll just be a matter of time before consumers follow suit.

It’s a scary thought isn’t it? Although I for one, am fascinated to see how this all plays out.

What do you think will happen? 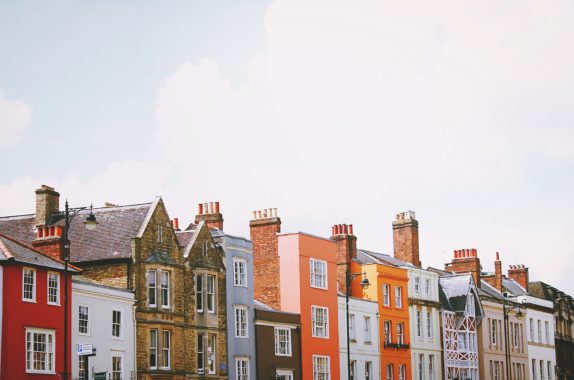 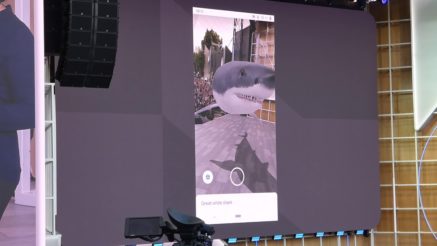 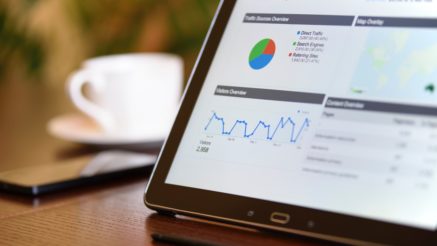 How to be More Efficient in your Digital Marketing Role

Hannah Thorpe
Looking to increase your productivity? Here are our top tips for improving efficiency and maximising your daily output in your...
Read More
Join our 9,000+ Subscribers
Receive daily, weekly or monthly updates on our latest content