Skip to content
Home » Articles » Uncategorized » Predictions for 2010, how did we do?

First of all: Happy New Year! I hope 2011 will be the best year we have all ever seen.

2011 has started. It’s the first Monday of the New Year and many of us are starting the New Year fresh with good resolutions. And a new year also means you can get yourself (mentally) ready for a lot, and I mean a lot, posts on almost every site predicting the future of search and social in 2011. After all, every self-respecting blog is making these predictions.

Why? Well for one because its ‘easy’ content, secondly it might be a link worthy article (I’m linking to many of them in this post) and third, it’s always fun to look into a Crystal Ball and predict the future.

The thing is with these posts, hardly anyone dares to look at them again 12 months after they were published. How did we do in the predictions? Did we really have an idea of what was going to happen? Or did the industry caught us by surprise? Time to take a look. Note: I can’t talk about every prediction made out there, there were too many, but I collected some interesting ones.

Playing it safe
What strikes is that when bloggers write prediction posts they may be scared to get things wrong, because what you see in many posts is that the predictors are ‘playing on safe’. Which means that many of the predictions are ‘easy’ and will surely be true (Like “Google will remain the biggest search engine”). There are few out there who really go out of the safe way and predict new things.

Google Instant
Nobody was able to predict Google Instant. Not surprisingly enough almost nobody thought Google was going that way. You could say that predictions about ‘real time’ came close, but Google Instant as such wasn’t predicted. Although Rand Fishkin came pretty close…

Google Caffeine
There was a lot of talk about “Google Caffeine”. The updates which Google rolled out on their algorithms in that period of time. If you look at the trends of 2010 , you’ll see that in June that got a peak again but for the rest of the year you hardly heard anyone talk about Google’s Caffeine updates.

Local
One of the elements which made a huge step forward in 2010 is Local. Looking at what Google is doing with Places Local is one of the biggest changes in 2010. Some sites got the local elements right, but there were surprisingly many who didn’t name Local as one of the trends to look out for in 2010. They sure didn’t predict the changes Google was going to make to local.

Real Time Search was launched in December 2009, so just when everybody was writing their prediction posts. It looks like many weren’t sure about the success of it seeing that not many actually wrote about it, but those who did were mostly agreeing on one thing: this would disappear soon.

Privacy
Then the privacy issues. Especially in Europe Google ran into some heavy privacy matters, most with Streetview. But not many predicted that these issues would arise. Aren’t we looking at the privacy issues anymore?

The things we got wrong

Its always more fun to start with the things we didn’t get right. Have a good laugh, be embarrassed a bit and move on. To be honest, more things went right than wrong, which also has to do with the fact that many played the ‘safe cards’. But lets start with the ‘smaller’ list.

On Searchengineland Debra Mastaler tried to predict 2010 in linkbuilding together with some of the big names of that part of the industry: Julie Joyce, Debra herself, Garrett French and Eric Ward. Not the worst group of people to ask for a prediction. To be honest, their predictions all were “on the safe side” but they did pretty ok. There were only a few ‘mistakes’ like Garret French claim about Yahoo Site Explorer: “Yahoo Site Explorer (YSE) will die, driving MajesticSEO’s link profile data sale”. Even though he was close, YSE is still there.

But Garret is not alone Rand Fishkin felt the same way about Yahoo Site Explorer when he wrote his “8 Predictions for SEO in 2010“. He was wrong there, but he came back strong as you will see below.

Real Time search
Rand had a close call in the same post with the Real Time Search – feature which Google launched a week before his post in December 2009. He figured Real Time Search was not here to stay. To be fair: it hasn’t become the success some may have thought it would be, and it has now been tucked away on a specific page within Google, but it is still here. But Rand got more things right than wrong (see below) so he doesn’t really have to be bothered about this one.

Bing’s power
Searchenginejournal got a lot of things right in their predictions for 2010, but they too missed one. They predicted Bing would be a lot more powerful than it has become, by going in the opposite direction of Google:

“If the minds at Bing are in tune to the situation they will take this time to go the opposite direction of Google, and capture a crowd of users that do not want their data collected and used against them.” Bing didn’t really go the opposite way, did they?

Google’s antitrust issues
Newsweek made several Tech predictions for 2010. One of them was “Google Faces Antitrust Suit“. Even though Google got into a lot of trouble in Europe, they didn’t really face any big problems with the FTC in the US as Newsweek had predicted.

YouTube: not as much progress as expected?
Video predictions were hard to find. Vidiseo made a nice effort, but overestimated the power of YouTube somewhat. They for example predicted that “YouTube Will Allow Brands to Sell Items Directly on YouTube” and “30 Second Ads Will Die“.

Social Media: the battle for the content
In a guest post on Readwriteweb called “10 Ways Social Media Will Change In 2010” Ravit Lichtenberg predicted a battle for the content rights. People want to own their own content. I think this will be an issue indeed, but in 2010 many didn’t seem to care (yet?). Still, it is an interesting prediction to look into for the future.

The things we got right

Did Rand get Google Instant after all?
Rand may have missed out on Yahoo Site Explorer, his predictions mainly were to say the least in the right direction. In his “More Queries will Send Less Traffic” prediction he predicted that Google would do even more to keep people on Google’s pages with new elements like game scores and weather within the Google suggest box. He wrote one sentence which would become very important without Rand knowing what he predicted: “I don’t even have to complete my query!” Little did he know at that time about Google Instant.

Linkbuilding
In the above mentioned Debra’s linkbuilding post on Searchengineland the experts got a great bunch of them right, even though they all kept quite on the safe side. But just to pick out two:
– Julie predicted “that we’ll see marketers figure out better ways to use social media to get links. “. I think she’s right there, there have been many more ‘smart’ linkbuilding moves on Social Media.
– Debra predicted “Becoming the “authority” in your niche (especially for competitive brands) will become paramount as the search noise on the web/net escalates.” Spot on Debra! 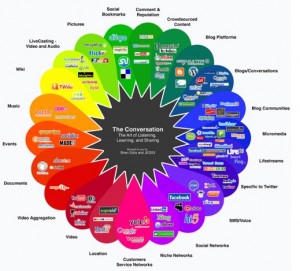 2010 without a doubt was the year Social Media came closer to search and closer to the bigger public. There were many who predicted that right.

Searchenginejournal got a lot right, with two of the main elements for 2010 as their big hits. They predicted SEOs would have to focus on two new concepts in their marketing plan in 2010: Social Media and Mobile Search. These two indeed became more important in 2010.

Video
Not many dared to predict the future of online video, but Reelseo made an effort, and not a bad one! They had some pretty good predictions like:

Privacy
Even though Google didn’t get into the amount of antitrust suits as Newsweek predicted, they did get a lot of fire when it comes to privacy. And they were not alone, so did Facebook for example. Not many predicted this, but John Batelle, who is famous for his predictions, did. In his 2010 predictions he stated “2010 will see a major privacy brouhaha“.

Local and Mobile
So Searchenginejournal got the mobile right. Others figured 2010 was the year of mobile too.

On SEOptimise they dared to go all the way: no less than 20 (!) predictions. They didn’t really predict but gave their ‘resolutions’. With those resolutions they however revealed some of the things they were expecting for 2010. Amongst those the prediction about Local and mobile: “I will undertake steps to gain foothold in the mobile and local markets by optimizing for mobile devices and local search”

Smallbiztrends did see the local opportunities: “Tried and true SEO is more important now than ever before. If you haven’t tied up all your local listings and profiles, it is beyond time to do that. The search engines, especially Google, are looking at the consistency and completeness of your local listings in order to rank you for relevant queries.” Their post had more ‘success’-predictions in them. They slam dunked Mobile, Site Speed, Social and video as things to look at. Well done Lisa Barone!

All in all I must say that many predictions were pretty ok, even if they were ‘on the safe side’ as I said before. But there were a few (like Rand Fishkin and John Batelle) who made very accurate predictions.

It was fun to read all the predictions a year after they were done. So, we are looking forward to the end of 2011 to see what predictions came through. If you want, you can make a start here, leave your prediction for 2011 in the comments, and we’ll check next year if you were right or wrong!