Back in autumn of 2016, the Authoritas team lead by David Bain our former Head of SEO decided to survey and interview leading SEOs worldwide to see if we could use the wisdom of the crowd to predict a coherent view of what the SEO world would look like today.

The research was broken-down into two separate parts:

1. In-depth video interviews with some of the leading SEOs back in the day (don’t worry they’re all still packing a big SEO punch today too!)  They are, of course, very familiar names to the majority readers of this blog:

2. A survey of SEO practitioners worldwide, nearly 300 of whom kindly gave us their perspectives on what they thought would happen by 2020.  The majority of these respondents are not ‘household SEO names’ on the conference circuit, but everyday practitioners at the sharp-end dealing with whatever Google throws at us all on a daily basis.

Since we’re just kicking off 2020, we thought it would be fun to revisit this research and see what was predicted and how many of those predictions stood the test of time; and also see if the industry luminaries outperformed the everyday SEOs we surveyed.

So, we’ve asked a few of the interviewees to review their 2016 predictions and also make some new projections for 2020.  We also asked them and a few new faces to offer some practical SEO tips and advice for optimising in 2020 and the years ahead.

2016 Predictions from the famous faces of SEO

What did our interviewees predict back in 2016 and what did they get right?

The interviews and eBook amounted to hours and hours’ worth of great content and hundreds of pages of notes. If I recall correctly, editing it took David, myself and Lauren 3 days!  For this reason, it is impractical to review every prediction in detail and it’s not my job to embarrass anyone who got it spectacularly wrong (because there’s still time for their prediction to come good this year!).

So, I’ve concentrated on where the predictions were pretty much spot on, or at the very least where conventional SEO wisdom says they were close to the reality we see today in the SERPs.

Let’s start with the easy ones we can all agree on.

Google announced it was sunsetting Google+ in December 2018 and shutting it for consumers in April 2019 and we all celebrated – one less thing for us SEOs to worry about!

I think it’s fairly safe to say links still matter (isn’t it?).  However, as you’ll see below, Greg suggests in his predictions for 2020 that the influence of links is likely to continue to diminish as Google finds other algorithmically reliable signals such as real site footfall. 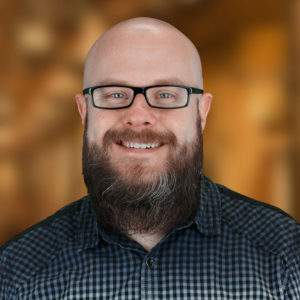 Well done Greg again.  Anyone who has been following updates to Google’s Search Quality Raters guidelines will no doubt be focusing on E.A.T and creating quality content and matching this to user intent.

Eric Enge, General Manager of Perficient emphasised the continued importance of keyword research in order to really understand the language your customers use.  In a world of growing voice search and a conversational search experience, understanding the search terms and questions your prospective customers use is as important as ever.  And we’ve seen from recent Google SERP features such as Featured Snippets, Answer Boxes, People Also Ask and Organic FAQs that answering users’ questions in a machine-readable manner is a winning SEO strategy.

One of the trickier questions asked the interviewees to predict the changes to the SERPs in the coming years.  And although Barry Adams of Polemic Digital’s answer wasn’t 100% correct (yet!), he certainly clearly pointed the way to a world where zero-click searches on the SERPs were a reality.

Nearly 300 SEOs responded to around a dozen questions about the future of our industry, some were even so kind as to provide quite comprehensive unsolicited opinions on the future of SEO!  So rather than rehash the whole survey again, I’ve simply picked five of the most interesting areas. This is what people thought about: 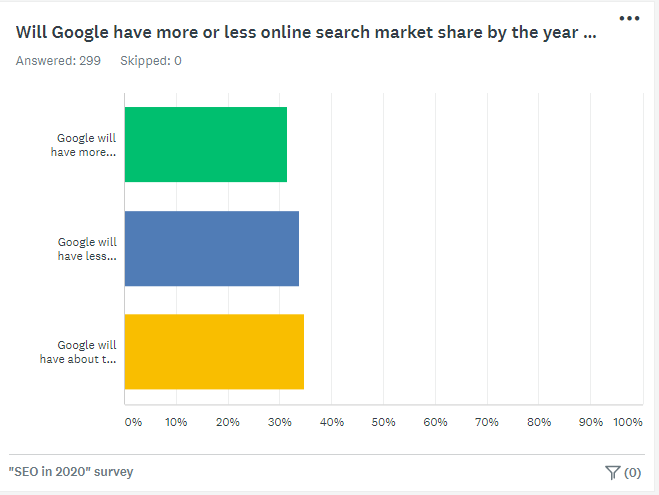 In reality what has happened? According to Statcounter, (whose tracking code is installed on over 2 million sites worldwide) Google’s market share has increased over this period from 91.01% to 92.71% and no single competing search engine or app has made a significant impact on its monopoly in search.  Google’s market share of course includes Google Search, Google Images, Google Maps and YouTube. 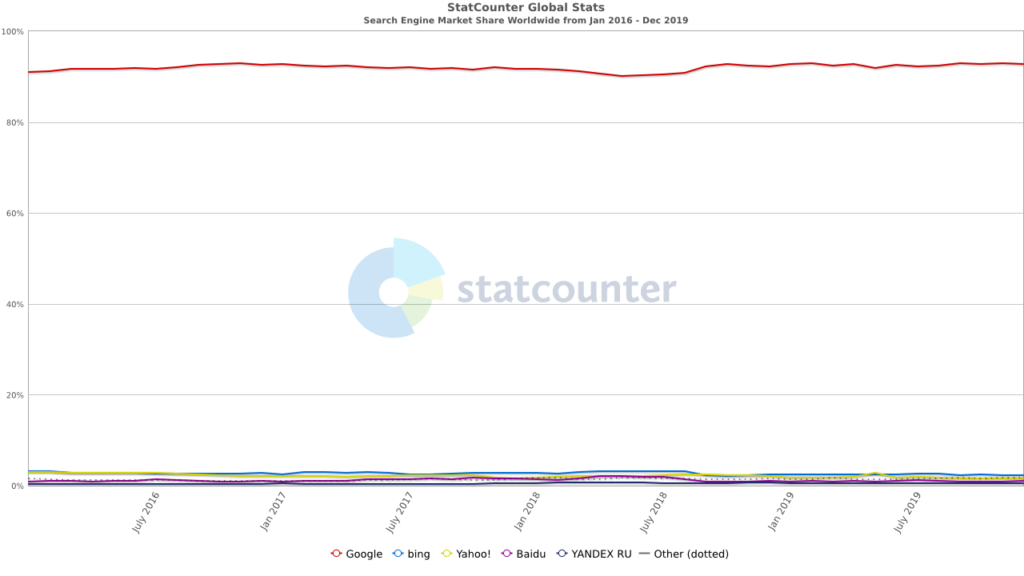 Interestingly, though quite a lot of SEOs believe (or maybe hope!) that this will change in the future as more users start specific vertical searches on apps and websites such as Amazon, YouTube, Autotrader, etc. 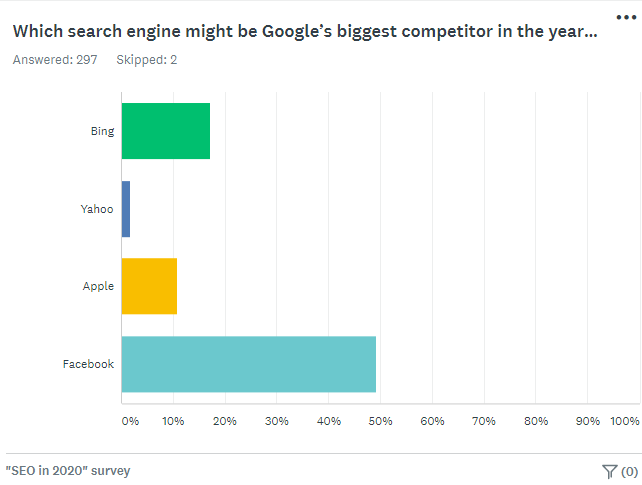 The trouble the competition have is how Google exploits its monopoly and financial muscle to keep new entrants out and out-muscle existing competitors.

With a clear trend for the majority of searches moving from desktop to mobile devices, it would have been a reasonable prediction back in 2016 to think that Google might lose market share to players like Apple or other search engines who might partner with Apple in the future.  But in reality, Google just dug into the top of its very deep pockets and paid to keep its market share; it’s rumoured to have paid Apple somewhere in the $3Bn to $9Bn range to remain the default search engine on its devices.

Regulators on both sides of the Atlantic have struggled to keep up with the pace of change and developments in the market and big fines have done little to stall Google’s march, with Google’s proposed solutions to regulatory decisions being widely criticised. Here’s just two examples; 14 Comparison Shopping Service providers wrote a join letter to the EU Commissioner for Competition in October 2018, complaining that Google’s compliance mechanism did not comply with the EU’s prohibition decision of June 2017; and in the past few days, DuckDuckGo  despite being one of the winners in the race to be one of the default search engine options on Android has still criticised Google’s approach.

I’ve not found any useful stats to support the argument one way or the other?  So I guess I’ll leave it up to you in the comments below? Is Negative SEO still an issue in 2020 or can we all sleep soundly at night safe in the knowledge that an unscrupulous competitor cannot undo all the good SEO work we’ve done that day? 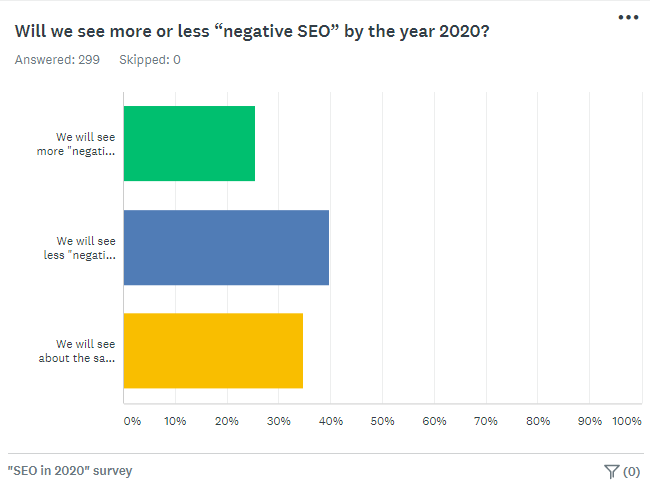 I’m sad to say this was pretty much spot on, especially for mobile users.  Google has continued to introduce new Universal Search features, the vast majority of which have pushed the 1st organic result further and further down the page.  This report from the travel industry shows that 94.8% of #1 organic ranking URLs are below the fold of the screen on mobiles and 63.6% on desktop.

Google has continued to vertically integrate its own SERP features to exploit and monetise lucrative market niches and this trend is set to continue unabated with only limited regulatory interference (IMHO).

That concludes the re-cap of our 2016 predictions. I think it’s fair to say both the famous faces and the everyday SEO did a reasonably good job of predicting the general direction the SEO world was heading and there were no gob-smacking surprises….but who knows what the next year may bring? What do you think will happen in 2020? We are keen to hear your thoughts.

Tune in to our next post regarding predictions and SEO advice for 2020.

Laurence O'Toole
Founder of SaaS SEO Software platform Authoritas. Laurence has been in the SEO industry for 20 years. He loves nothing better than pouring over big data files to find opportunities that give his clients a slight edge over their competition.
Find out more about Laurence 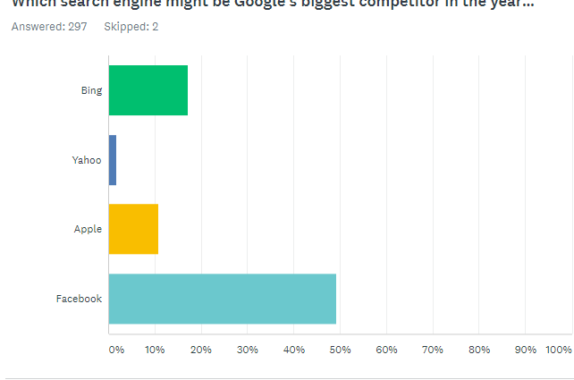