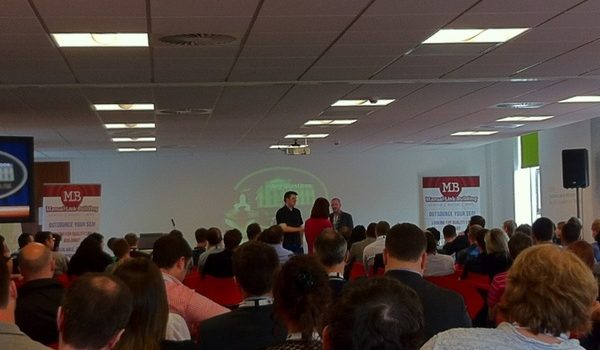 The next SAScon session I chose to attend is called ‘Breaking Free of Panda/Penguin’ and features my good friend Peter Young from Mediacom and Holistic Search, and the original SEO rapper and Jason Statham lookalike Neil ‘SEOmad‘ Walker.

Peter kicks off by listing the issues Google is looking out for in web spam, such as cloaking, malware, sneaky redirects, link wheels, paid links, and many more of such tactics that Google disapproves of. Temporal spikes – i.e. link velocity – is also a big warning signal for Google’s web spam fighters.

Neil asks who in the audience has been hit by Panda or Penguin, and who’s received bad link warnings in GWT. The most hands go up when asked about Penguin, indicating the severity of this latest update.

Neil states that receiving an unnatural links warning from Google is not the same as being hit by the Penguin update. He goes on to show a case study where two sites’ backlink profiles are compared in terms of branded vs keyword anchor texts. One site was unaffected by Penguin, whilst the other suffered a massive blow.

Using MajesticSEO’s new link visualisation tool, Neil shows that the core difference between the sites is in the quality of their link profiles, with the Penguinated site showing much more low quality links.

Which Animal Hit Me?

Peter then explains timing is key when trying to determine which update has affected a site, showing a timeline of when the various Google updates were rolled out. Match your site’s traffic fluctuations to the roll-out of the Panda & Penguin updates to see which it was, and that information can help your recovery strategy.

Peter also stresses the difference between penalties and declassifications, where Panda & Penguin are more along the lines of the latter. He sees a lot of different types of effects, from penalties on specific keywords to site-wide declassifications.

The key message from Peter’s slides is that many penalised sites feature an over-dependence on a single channel of link acquisition, with limited variety in their link profiles, and different Google updates having hit different link channels.

So what can websites do to break free of the Panda/Penguin cycles? Peter advises focusing on good content and a blend of link acquisition methods. Backlinks are still a major ranking factor, but the quality of those links is an increasingly important part of that equation.

It’s important to make your link profile more brand-friendly – i.e. generate more branded links than keyword links, as the former is seen as the more ‘natural’ way to link to a site. Also implement the rel=author markup and rich snippets where possible, to make sure you can tap in to the semantic search – knowledge graph – Google is rolling out.

The session was concluded by a great Q&A where Neil and Peter gave detailed answers to a number of questions from the audience.

Latest Post from Barry
Events Marketing on Amazon in 2020 [Report]