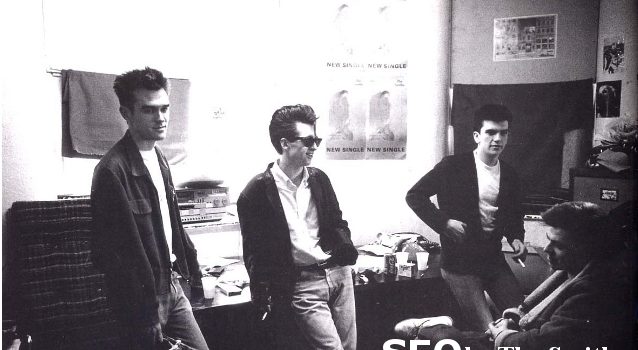 What The Smiths Can Teach Us About SEO

This is a guest post by Chris Smith is a SEO Copywriter at Manchester-based digital agency Fluid Creativity, providing bespoke web design and SEO services to a range of clients. Like this post? Let us know!

When you think of SEO experts, who comes to mind? Matt Cutts, SEOmoz’s Rand Fishkin, SEOBook’s Aaron Wall? We’re willing to bet that one person who definitely doesn’t figure in your thinking is professional miser and ex-frontman of The Smiths, Morrissey.

Inspired by this excellent post from Copyblogger on Eminem’s guide to becoming a writing and content marketing machine, I’ve decided to draw on inspiration a little closer to home for us here at Fluid. In a move that I’m almost positive would make Moz himself baulk, I’m going to spend the next few hundred words trying to convince you that The Smiths entire career and discography can actually be interpreted as a series of important lessons for people working in SEO, particularly in regards to content.

Odd? Definitely. Far-fetched? Not as much as you’d think. Without further ado, here are some of the vital SEO lessons we can learn from Manchester’s favourite miserable sons (sorry Joy Division).

Part of the appeal of our favourite bequiffed hero and his merry band of miserabilists was their ability to appeal to just about anyone with their music. At various points in their career, The Smiths were a rockabilly, indie, pop and rock band. Morrissey often cast himself as a different character from song to song. How did they do this? They read, listened and did lots and lots of research.

Just as Morrissey would read a play about a pregnant woman before writing a song about it, you should get properly involved in the industry your client works in. Get on forums, dive into blogs, load up your Google Reader with relevant sources and generally immerse yourself – you’ll find that your content becomes more relevant and well-informed as a result. You’ll build respect for your client through great content, which in turn will lead to lots of lovely links as well as helping to cast your client as an authority figure in their field.

Plagiarism is bad but inspiration is very, very good

Morrissey trod the fine line between taking inspiration from his favourite writers and plain stealing from them. He eventually got caught and frequently criticised for it and so will you if you decide to steal your content. The Smiths wrote ‘Cemetary Gates’ about their plagiarism plight; all that awaits you is the scorn of a community and a swift drop down the rankings.

Nevertheless, don’t avoid taking inspiration from other sources entirely. A truly original idea tends to be rare, and you don’t have time to wait around for it crop up. Don’t be afraid to look at what has worked for other people and draw inspiration from it for your own purposes – this post is a perfect example, having taking inspiration quite heavily from Copyblogger’s post on Eminem.

Get The People Talking

Wherever Morrissey goes, controversy follows close behind and he knows it. Even today, Moz knows the best way to get people to listen to his questionable solo output is to get a quote in the national papers stating people who eat meat are the spawn of Satan.

We’re not saying you need to position your client as a militant vegetarian, but we are saying that getting your content out there to the important people who will give you valuable links is massively important. Get it on social networks, pitch it to influential blogs and websites, even take a leaf from Morrissey’s book and attach a bit of controversy to it – just whatever you do, get your content out there and get people talking about it. Remember, generating online conversation means plenty of sharing and quality links.

Don’t Repackage The Same Thing Over and Over

During their short time, The Smiths released four seminal albums and a couple of brilliant b-side compilations. After their demise, they’ve released no less than six ‘best of’ albums. As you can imagine, even the most hardcore of fans aren’t too receptive to being sold the same thing over and over.

There are two things to take from this. The first is obvious; don’t create duplicate content. Search engines penalise it and it doesn’t look particularly brilliant to the human eye either. The second is to realise that something that worked once might not work as well the second, third or fourth time. Don’t stick to a rigid content formula, because people will get bored and figure you out for the one trick pony you are. Keep things fresh and keep your audience excited and wanting more.

This also applies to link building too. It’s great to have some exact match keyword anchor text links, but having 4000 of them definitely isn’t. Similarly, try and mix up where your links are coming from so your link profile looks more natural.

Every Morrissey Needs His Marr

The Morrissey-Marr relationship is often seen as the key to The Smith’s success and there’s a reason for this; their skills complement each other perfectly, with one covering for the other’s weaknesses. Morrissey, with his classical literature inspirations and dry wit, was a master lyricist and performer. Marr, more understated, provided the jangly backdrop to Morrissey’s bleatings, the engine that kept the band going. Just as Morrissey’s solo career floundered without Marr, good content will flounder without good technical backing.

As an SEO team, The Smiths would be perfect. Morrissey, with his flair and his ability to make the plain fascinating, would be an ideal copywriter. Marr would be the technical SEO, willing to sit in the background and make the content is housed within a sound and pleasing infrastructure. Essentially, you want your SEO team to reflect the Marr and Morrissey relationship, a perfect balance of creativity and technical ability.

Next time you happen to hear ‘This Charming Man’ in a shop, or pop on ‘The Queen Is Dead’, remember; this isn’t just a fun listening experience, this is also a learning experience! Next week, web development tips from Echo and The Bunnymen.