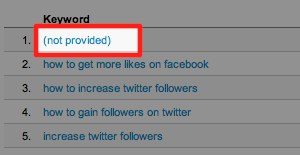 Last October Google set the SEO World on fire when they started to encrypt searches, using SSL. Searching from https://www.google.com (note the “s”) will mean some search queries are encrypted.

That meant that SEOs were getting a lot less referral data than before. In your Analytics you can now find several referrals to “not provided”. Until recently that was just for searches coming from Google.com. Now Google is rolling this out to the entire world.

In a rather short post Google announced it is bringing SSL Search around the globe. The different local domains will be updated in the next few weeks.

This means that domains like Google.co.uk, Google.nl and Google.fr for example will be updated soon. Looking at how Google usually does this the English speaking countries will go first followed by those countries where Google has the most to win or lose. There are already signs that Google.co.uk has been changed when it comes to SSL Search.

What does that mean for us?

For the users it means that their privacy is protected a little bit more, at least according to Google. As they say:

“The change encrypts your search queries and our search results page, which is particularly important when you’re using an open, unsecured Internet connection.” 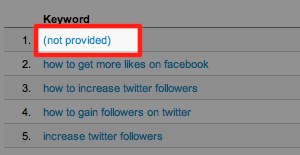 How ‘really’ secure that is remains to be seen, but as Google states it is mostly important for those searching on public computers. If it would be your computer at home it would be less of an issue. Google however doesn’t make a distention between the both.

For the SEOs and Analytics people it will mean they will have less indication on how people actually find the site. They will see a higher percentage of “not provided” results showing up in their Analytics.

Google originally said that the impact would not be so high, it would only be on a small percentage of searches, but website owners have been reporting numbers of over 20% so it could be a lot higher than expected.

Can’t I just use another analytics program?

One of the questions I have been asked many times about this in the past few months is whether using another analytics program than Google Analytics wouldn’t solve the problem. The answer on that is pretty simple: no.

Other Analytics programs get their data from Google when it comes to which search terms are used to find a specific site, which means that they will receive the encrypted data just as Google Analytics does.

The release of the SSL Search to the rest of the World might indicate that the Search Plus Your World feature is about to be rolled out around the globe as well. SSL Search after all is something which is important to protect peoples privacy and with SPYW there is a lot more ‘personal’ data out there.

And with the many privacy concerns around Search Plus Your World, rolling this out first might ‘ease the pain’ a bit.