Hello State of Searchers, long time no speak! I’m back contributing to the blog – after a 4 month hiatus, during which time I moved countries, shipped a load of things, bought some white goods and settled down to life as an expat in Sydney. It’s good to be back!

I’ll be bringing the usual digital and search opinion pieces and updates, while alongside this investigating the digital industry around Australia and getting to know some more of the people that make it happen.

Having now been here for 3 (very hectic) months, I finally made it to my first event – fastBREAK, a breakfast event held at Sydney’s very impressive Powerhouse Museum. Although not strictly ‘digital’, the event gave me a great insight into the innovative and entrepreneurial spirits of some of Australia’s ‘Generation Y’. This is particularly interesting in a country that is often considered ‘digitally behind’ as compared to big players like the UK and US.

fastBREAK is part of a series of events and projects undertaken by an organisation called Vibewire – “an innovative non-profit youth organisation providing media, arts and entrepreneurial opportunities and events for young people”. They’re a great and inspiring bunch of people involved in a host of exciting, and innovative projects.

fastBREAK is held once a month, for 90mins at the Powerhouse, with a very delicious breakfast (and two different types of coffee – now that’s Australian!) provided by local businesses. A theme is set and 5 speakers are invited to speak on their theme-related topic for 5 minutes each. It’s quickfire, a great way to kick off the day and truly inspiring.

This month’s theme was ‘Magic’ and speakers related to this in a wide variety of individual ways: from the power of gamification to mediatation via building social communities online and growing events virally.

Despite only being 25 mins of talk, it would take me tens of thousands of words to write up everything that was shared, so I’ll share one top takeaway from a few of the speakers:

Danielle is responsible for the 11eleven project, a film based around the 11th November 2011 created by asking people from around the world to capture a part of their day using film, photography, music, sound and text. There were submissions from 179 countries (out of 197 int he world!).

This project is living proof of the power of social media and communities over lack of budget – turning to Facebook, Twitter and YouTube (among others) to virally promote the idea. Check the trailer below for an idea of the results!

Top Tip: Leave Your World Behind

Cheesy though it sounds – impossible doesn’t have to be a word if your idea is truly captivating. The power of film and storytelling is strong enough to work with social media – knowing the idea you have WILL appeal to others is a huge piece of the puzzle. Over 660k likes on YouTube don’t lie!

When I spoke to Danielle about the perception of innovation within Australia, she felt:

“Australians in general don’t take big risks. We are innovative and have the talent but often think too locally, the rest of the world is removed and we are still finding out place in it. Big ideas can exist but don’t make it as far.”

Lizza is all about ‘creating social impact through innovation and creativity’ and started digital (online and iPad versions now available) Corker back in 2007.

It can teach you a lot about to how to be an entrepreneur, how to change your life.

Consider the idea of ‘Quests’ for example – the whole reason people lose hours (and days) of their lives to games is because they are working to achieve their goal. They are challenges that are just that tiny bit out of their immediate skills zone. However their goal is not one goal set in the distant future, it is a serious of quests with visible progress bars.

I asked Lizza her opinion on why Australia seems to struggle to be digitally savvy (when her independent magazine has launched its iPad version before many big brands) and she had a very interesting take on this.

“Everything is too easy in Australia. People are too relaxed, the drive doesn’t exist in the same it does in the UK or US. In London or New York, the weather may play a big part too. If it’s cold outside, people are more likely to stay in and work on a project, achieve their goals. If the sun is shining and the beach is calling, Australians are too busy enjoying the outdoors to become more innovative!”

Among his many achievements at a young age, Ehon is the founder of Soften the Fck Up, a site dedicated to getting men to lose the tough attitude and open up about the issues they face. He’s the co-founder of The Hub, a  professional community promoting networking and workspace sharing in Melbourne, and soon to launch in Sydney.  He has also been named “Top 100 Most Influential People in Melbourne” by The Age’s Melbourne Magazine.

The internet enables us to be hyper-connected, knowledge is shared at an ever increasing rate. In order to achieve our ambitions, we have the tools at our disposal but we need three core focuses: Motivation, Time and Connections. Motivation and Time can often be out of our control or difficult to change. Our connections however are easy to change. Find people who have the skills you need to acquire, speak to them, learn from them, look for talent beyond your own. How you connect will directly impact on your innovation.

When I asked Ehon his view about innovation in Australia, his views were again slight different:

The American culture (for example) is all about ME and I – how can I stand out? How can I prove how good I am? The Australian culture is more about sharing, we don’t want to stand out, we don’t have the ME idea. That goes against the entrepreneurial innovative spirit. It’s not that we don’t have the talent, we just need to find ways to do our own thing.

Three quite different views about innovation and the digital industry in Australia today, from people who have been hugely successful in harnessing it.  Australia as an economy faces a lot of different challenges compared to Europe and the US, and that certainly shows. However innovation, especially within the digital industry, therefore requires a different attitude and a flexibility to adapt to other cultures in order to promote your own. This is something that is perhaps quite unique.

That’s me done for now. More on search and digital from down under soon. I apologise to the other speakers for not being able to include more on their talks in this post, it was rapidly turning into a novel! 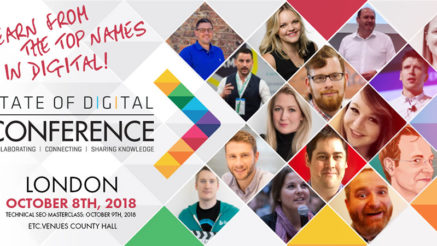 Polly Pospelova
The State of Digital conference was held in London on 08 October 2018. Here is Polly's recap of the panel...
Read More 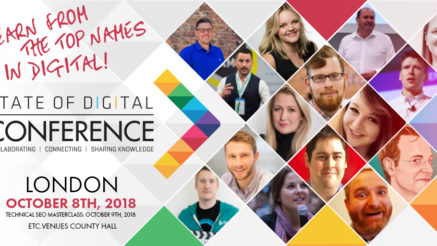 State of Digital conference session: How to become an SEO Rockstar

Polly Pospelova
The inaugural State of Digital conference took place in London on 08 October 2018. Here is Polly's recap of one...
Read More
Join our 9,000+ Subscribers
Receive daily, weekly or monthly updates on our latest content