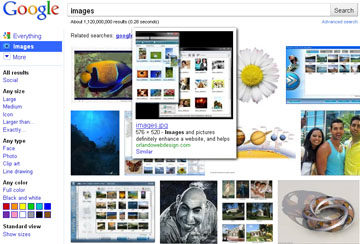 Last week Jeroen van Eck and Bill Slawski lamented the lack of a solid guide to image search optimisation. Bill threw down the gauntlet, and I picked it up. Here’s my Definitive Guide to Image Search Optimisation.

First, what do we mean with image search? Simply put it’s the vertical search option that allows you to search for images on the web. Google has an image search, and so does Bing, and there are several other specialised image search engines around.

For the purpose of this blog post we’ll focus on Google’s image search, though I reckon most of what follows can also be applied to other image search engines.

Why is image optimisation important? Well, search engines can’t see images. Now this is not entirely accurate – search engines are getting darn clever indeed – but it’s a good starting point to keep in mind when you want to optimise the images on your website.

So, as search engines can’t actually see images as we do, we need to tell search engines what those images show. This involves a wide range of on-page factors:

Alt-text
There’s some dispute about whether alt-texts are factored in or not, but personally I’d err on the side of caution The alt-attribute of an image is a strong indicator of an image’s topic, so you want to make sure your image’s alt-attribute is well-written and contains relevant keywords for your image.

However, for non-vital images on your web page (bullet point images for example) a blank alt-text is better. That way search engines don’t get confused about which images are important for the content of the page, and which images exist purely as support for the page’s formatting.

Page Content
Search engines look beyond just the image, they also look at the page the image is embedded on. An article about race cars is likely to have accompanying images showing race cars. This means the page’s content needs to align with the image. Often with Google Image search you’ll find that the headline of a page where an image resides contains the keyword you searched for.

File Format
Your image should be in one of the three major image file formats: PNG, JPEG or GIF. Personally I’d recommend using JPG as this has additional benefits in other verticals (Google News for example), but don’t hesitate to use PNG or GIF if you feel it’s better for your images.

Image Dimensions
While on Google image search you can find images in a wide range of dimensions, if you want to break through with universal search it’s recommended to keep your image dimensions within certain parameters. An image size of at least 250×300 seems to be the accepted norm – bigger is OK, smaller isn’t.

File size
Don’t make your images too large in terms of file size. With JPEG this can sometimes be a challenge when too much compression can ruin an image’s quality. But image size is quite important, not in the least for your site’s load speed which is a ranking factor in web search.

Anchor Text
When you link to an image on your site (a large version for example) the anchor text of that link is a factor. We know search engines love links and pay close attention to anchor texts, so make sure you’ve optimised your anchor text to be relevant and descriptive.

Do note though that, if you run a news site, you shouldn’t have the images that accompany your content link to anything. Linked images do not show up as thumbnails for your news articles in Google News, as it prefers unlinked images in news items. Read more about SEO for Google News here.

Title text
An image’s title attribute is the text that shows up when you mouse-over an image. Or at least it should be – some browsers handle titles differently. The title text doesn’t convey any benefit for image search, so it’s up to you if you want to use it for anything. For the sake of clean and lean code you might want to omit it entirely.

Image Sitemap
To increase the changes all your images will be properly indexed, you can add them to your site’s XML sitemap or create a separate image sitemap for them if you want to keep things organised. The only data that is required is the image URL, but you can also add the caption, title, and geo-location of the image (where it was taken) to your sitemap.

Read Google’s guidelines on images in your XML sitemap here. I recommend using the image’s alt-text as the title in your sitemap, and to keep the caption the same as on your site.

Practice Moderation
Now with so many factors to keep in mind it’s very easy to stuff keywords in everything and hope for the best. Needless to say, this is not desirable. So practice moderation and don’t stuff keywords everywhere. Relevance is key and you want to make sure the whole package, from image filename to page content, conveys that relevance to search engines.

Now at this point I feel obliged to point out Bill Slawski’s analysis of a 2006 Microsoft patent regarding the ranking of images for a search query: How Do Images Get Ranked in Image Search?

What stands out here is the possibility of search engines going beyond the on-page factors and looking at things such as link relations between images, the number of times an image is used on a site, number of websites that use an similar image, and click-through behaviour of users on image search SERPs.

I highly recommend Bill’s post and the associated reading material, but I think you shouldn’t worry about it too much. Make sure you get your on-page image optimisation factors right, and you’ll be there most of the way already. And having pictures unique to your site doesn’t hurt either.

The Future
There’s some talk about the use of the EXIF image file format for SEO purposes. EXIF is an extension to existing file formats such as JPEG and TIFF and it’s already being used by many digital cameras. Basically with EXIF you can embed metadata about your image in the actual image file itself. This metadata can then be read by programmes such as image sharing sites and, yes, search engines.

While this metadata is mostly technical information about the image such as details about the camera it was taken width, specific camera settings, and compression and resolution info, there’s a chance in the future other SEO-relevant information can be included such as description text. Geo-location info is already part of EXIF, and this could be used by image search engines to connect images to geographic locations.

Right now I wouldn’t worry too much about EXIF, but if you’re serious about image SEO it’s a good idea to keep an eye on it.

Conclusion
To wrap things up I’ll leave you with some words of wisdom from the big G itself: the Google Webmaster Central page on image search.