It’s nice to know that at the age of 26, I’m still considered somewhat of a youngster. In fact, that’s the reason that I’m writing for the State of Digital, after winning the Summer Series competition. Thank you to all of those who read and shared; there were some really great blogs, so it was a real honour (and surprise!) to win the competition.

As I previously worked in marketing for a private school, I naturally have an interest in education. One of the topics which has caught my attention since moving to an agency is the increased focus on the digital skills gap. Quite simply, it is said that the UK has a shortage of digital skills in the younger generation due to the rapid and constantly accelerating growth of the digital and tech sector. There are real concerns that the current education system cannot keep up and does not give children and young people the skills that are required to thrive in a digital focused job market.

TechUK released a report this year highlighting the danger of not fully addressing the digital skills gap. It estimates that 1 million new digital jobs will be created by 2020 but emphasises the fact that computer science graduates have the highest rate of graduate unemployment. It also points out that 93% of businesses have said the digital skills gap has had a direct negative impact on their business. It’s estimated that if the issue is not dealt with, it could cost the UK economy £2 billion.

So what is being done about this?

In 2014, digital skills muscled their way into the curriculum. In England and Wales, the subject of ICT was replaced with Computing. ‘Soft’ IT skills, such as learning how to create PowerPoint presentations and Word documents, were replaced with learning how to programme and code in different languages such as HTML and Python.

This is quite clearly a step in the right direction. However, a problem has arisen with this substantial change in the curriculum – the teachers. In a YouGov survey it was found that at the same time that the new curriculum was rolled out, only 15% of teachers considered themselves ‘computer savvy’ and only 40% of 1,009 teachers said they were ‘good enough to do what I need to do’ in terms of their digital skills.

Have we been ignoring another problem?

The uncovering of the lack of digital skills for teachers highlights that there is not just a digital skills gap with the younger generation, but there is also one in older generations too. It’s something that many of us may be aware of. Watching one of my parents use a remote control is infuriating enough, let alone watching them use a laptop or tablet.

That’s not at all to say that anyone above the age of 50 is technologically illiterate; however, they have not grown up attached to digital devices as many of the younger generations have. Lance Perry who is the Vice President of IT Customer Strategy and Success at Cisco Systems says:

“So many execs don’t want to admit how much they don’t know. This [millennial] generation was born with computers in their hands — it’s ingrained in the way they listen to music, get a trip scheduled, or get coffee or meals.”

The Basic Digital Skills UK Report, 2015 shows the chasm of difference in digital and online skills between age groups: 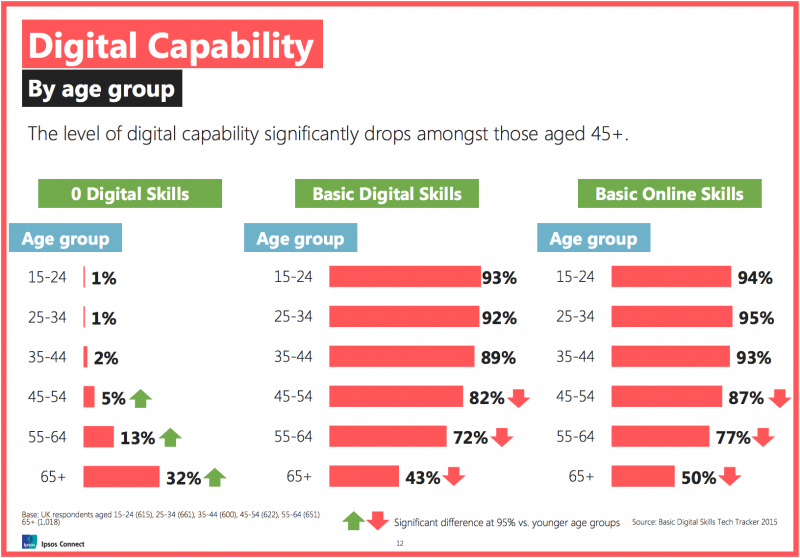 What effect does this have?

This 2013 report from the Institute of Leadership and Management shows that the average age of a manager is 45 years and 10 months. The majority (56.3%) of managers are 45 and above. Simply, this means a large number of managers and decision makers in companies lack basic digital and online skills.

It’s safe to assume that lacking these basic digital skills mean that a number of managers are going to struggle to see the benefits and opportunities of a digitally focused marketing strategy. As the number of those working past retirement age continues to increase it means that the lack of skills is going to stay around at the top for longer.

Venice Rao, the CIO of GE’s Digital Energy Division said: “GE is a 130-year-old company, and for most of [the leadership], technology is not a core competency — they use about 5% of the technology offered”.

This also causes frustration further down the company. A survey by VMware on digital skills found that those aged 18-24 don’t think senior management understand the technology infrastructure in enough detail to allow digital skills to be used in the workplace.

The report also highlighted that 44% claimed they were not able to use their digital skills at work due to budget constraints, and 41% said there was a lack of support from their IT department to allow digital initiatives to be used throughout the organisation. This further compounds the problem of the digital skills gap as the younger generation is not getting to put their digital skills into practice and will not see the value of learning them. As the digital sector keeps evolving, those people who do not use digital skills will get left further and further behind.

All of this adds up. Go.On UK estimate that 1.2 million SMEs do not possess basic digital skills. And this means one thing: It’s bad for business. Go.On UK say that by not possessing these digital skills, that SMEs are missing out on the UK’s annual online sales of £193bn per year. They lose a competitive edge against competitors and this creates a serious negative effect on growth.

What’s being done about this?

This is not a brand new concept but a number of large companies such as Cisco, Credit Suisse and Accenture that have identified the digital skills gap at management level are using reverse mentoring. The idea is to let junior level staff teach and support older executives to learn new digital skills. Many companies have already seen the benefits of implementing reverse mentoring schemes.

In 2011, worldwide managing director of Ogilvy & Mather, Spencer Osborn, worked with junior level staff who helped him make his tweets more interesting after admitting that they were seen as “very boring.” He was such as fan of the programme that he looked to roll out the scheme to 450 offices using Skype.

In another example, Unilever saved $120,000 by choosing to hold a conference online rather than by traveling and hosting it in a hotel as was done previously. This decision was made after executives participated in the reverse mentoring scheme.

How can the industry help address the digital skills gaps?

Included in the techUK report were several recommendations to help create the right environment for schools to teach digital skills, for both teachers and students. A number of them focus on how the digital industry could help. These include:

Some ways to do these have been suggested:

I believe that it’s correct that the report suggests that those working in the industry should help address this problem. We know that we already have the skills and knowledge needed to succeed in the sector and it’s likely that a large portion of us are going to play a part in shaping and being involved in its future. Many of us will have had to get into the industry ‘the hard way’ because of no formal education or training, and understand the frustrations that come with that. By helping and encouraging young people to learn digital skills, we have the chance to reduce the frustrations faced by future job seekers.

For the other digital skills gap, companies need to identify where senior level staff are lacking in digital skills and if there are junior level staff with capabilities to assist. That in itself is a problem, as some senior level staff may not even know where they lack skills and as stated previously by Lance Perry of Cisco, they may not want to admit it. However any company that is serious about growth and its future will know that it has to understand where they fit into the digital world and in doing so will have to audit their skills.

In order to set up a reverse mentoring program and take advantage of the digital skills that a millennial worker has, a company needs to have a clear structure. There are many examples and guides available, but two points seem to be on every one:

In order for any type of mentoring or training programme (regardless of it being in reverse) to be successful, both parties must know what they’re expected to achieve. Setting goals allows someone to work in small steps towards a larger goal, and knowing expectations allows them to measure their progress.

A key point to making a reverse mentoring program successful is for both parties to be clear & open minded. We are raised to believe that the older person is more knowledgeable and that the younger person is always the one learning. This preconception has to broken for reverse mentoring to work. The mentee must admit what they don’t know and be comfortable doing so to someone younger. Equally, the mentor must be confident enough in their own abilities and knowledge, and trust that the older colleague is there to learn off them. They must also realise that they are in a position to learn; they have one-on-one meetings with management where it is inevitable that knowledge gained from experience will be shared.

How do we make sure that we don’t end up becoming out of touch with the latest digital trends and technology (again)?

One point that has been made with reverse mentoring is that it’s not just digital skills that are being learned. Executives have been opened up to how flexible millennials are with their working attitude.  It is key to embrace that fact, and to build in learning and education time to the working week without losing productivity.

Whether that is a couple of hours set aside to read some blogs and watch videos, or spend a number of days attending conferences or having dedicated company-wide sessions to learning.

In our agency we have ‘Innovation Sessions’. Once a month we meet up as a whole company and discuss things we’ve learned or noticed and are set tasks to explore ideas with those techniques or situations we’ve talked about. This allows everyone to always be up to date with changes and new techniques. Education should be made a key topic for MDs and Operational staff to consider. This is not only a benefit for employees, but allows them to stay ahead of the curve by identifying and learning how the latest digital offerings can benefit their business. It doesn’t stop when we throw that grad cap in the air!

How does your company keep up to date with industry changes and digital trends?