Skip to content
Home » Articles » Search Engine Optimisation » The Division Within SEO: Google is our friend/enemy 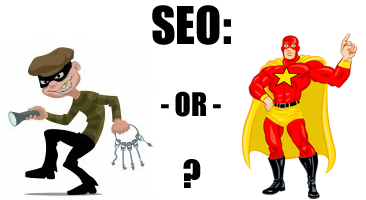 The Division Within SEO: Google is our friend/enemy

Over the weekend there was an interesting post up on SEOmoz which chronicled Rand Fishkin’s discussion with SEO Book’s Aaron Wall about outing web spammers. It’s definitely worth a read and will provide some background information for this blog post.

Basically Rand is in favour of pointing out what he believes are bad SEO practices, specifically web spam, and Aaron is against it. Some other SEOs contributed to the debate, as well as a follow-up discussion I had with Rand and others on Saturday.

Like Aaron Wall I am against outing, and I’ll explain why. What it boils down to is how SEOs perceive their relationship with Google and other search engines to be. Many SEOs think they are Google’s allies, part of the ongoing struggle to improve the web’s quality, making it more usable and findable.

Within this context, outing spammers makes perfect sense. If you believe your job is to make the web better, then pointing out those practices that are detrimental to the quality of the web is perfectly logical.

But I believe is an entirely flawed mindset. The point I have made many times before is that Google is not our friend. We, as SEOs, are not Google’s allies. In fact, we are its enemies. It’s beyond the scope of this post to detail all the reasons why Google is our adversary, but if you want you can read all about it here.

(Note that since that post was written, Google has done much more to aggravate and marginalise SEO, so the case for animosity is even stronger today.)

Some pro-Google SEOs make comparisons between web spammers and criminals (like Rand does in the Twitter debates), justifying outing them as turning them in to the police. This is, of course, entirely farcical, as web spammers break no laws (generally speaking) except Google’s own arbitrary guidelines. And these guidelines do not exist for the greater good of the internet – they exist because Google wants to make money.

And until Google starts paying me money – significant amounts even – to help combat web spam, I will take no such part in their ongoing fight against spam. Aside from the occasional annoyance with blog spam, web spammers do not harm me or my business practices.

Google, on the other hand, with its ham-fisted approach to combating spam, marginalising SEO in favour of its PPC cash-cow, and ongoing ‘usability improvements’ that drive other websites out of business, does a whole lot of harm.

In fact I believe SEOs who see Google as their friend are, in a way, in an abusive relationship. Their big powerful friend called Google continuously lies to them, abuses and humiliates them, maintains a stance of ‘do as I say, not as I do‘, and generally strives to make SEO obsolete. And in return the SEO showers Google with praise and adoration and follows its decrees with near-religious fervour.

If that is not a prime example of an abusive relationship, I don’t know what is. And I don’t know about you, but I’d rather not be part of such a masochistic arrangement.