Skip to content
Home » Articles » Uncategorized » The growth of mobile search: huge in numbers, not in CTR (research) 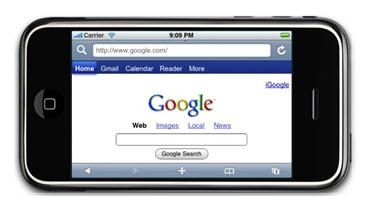 The growth of mobile search: huge in numbers, not in CTR (research)

It is clear that mobile is not just a growing market, it is a market to really dive into. Mobile is interesting for both search engines and for advertisers. Research performed (in the US!) by Efficient Frontier shows us that the number of mobile searches and mobile paid ads is growing rapidly. But CTR and ROI still stays behind.

Efficient Frontier tells us that already 10-15% of traffic on average comes from mobile devices. And that’s an average, if you look at specific markets these numbers can sometimes even double. The research also shows that 5.4% of all paid search impressions currently come from mobile devices, which is a huge growth compared to last year. This means that by the end of 2011 Efficient Frontier believes that “somewhere between 7.0%-9.5% of search advertising dollars could be spent on mobile devices”. 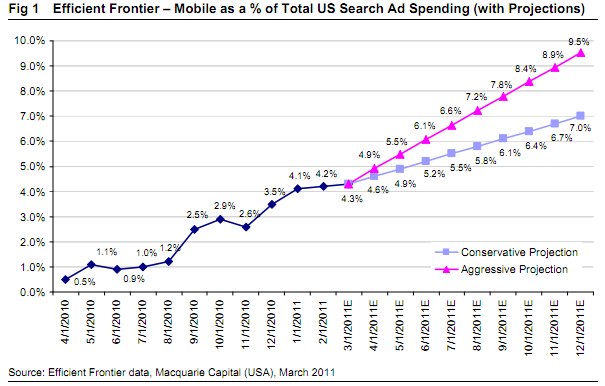 The research shows the immense growth of mobile in general and mobile search in particular. But it is not all good news. There might be a lot of searching going on on the mobile devices, if you look at CTR and ROI at the moment mobile clearly stays behind.

Mobile searches have a click-through-rate 30% lower than desktop, the cost-per-click is 13% higher, which doesn’t really make it a tempting platform to put your ads on just now. Also mobile sees a lot less transactions completed which makes that the ROI is just 10% of desktop ROI. E-Frontier does note that iPad ROI is significantly better, but you can argue whether or not that can really be considered as a ‘mobile device’. Like on the desktop on mobile Google also rules in search. 97% of mobile search ads come from Google, only 3.2% is done on Bing/Yahoo. And Google apparently benefits from the shift to mobile: “GOOG gains $50mm for each 1% share shift to Mobile Search in the U.S.; YHOO loses $20mm”.

The mobile searches are significantly influenced by Apple. Most searches are done on an iOs platform, but Android is gaining ground there too.

Interesting to see, though not surprising, is that mobile searches spike in periods of lower desktop search activity. So when people step away from their PC they continue to search on their mobile devices.

Finally Efficient Frontier also tells us that specific verticals benefit from mobile. They extracted Google searches in different verticals and noted that Restaurants take up most of the searches: 29% of searches are about restaurants. Autos, Consumer Electronics, Finance and Insurance and Beauty & Personal follow on a distance with about half that number each.

So what to do with these results?

So should we go mobile or not? If you look at these numbers the discussion isn’t made out yet. Yes, there are more and more searchers on mobile devices, but no, at the moment they don’t seem to convert.

Still, if you would ask me “should we spend on mobile?” my answer would be yes. First of all you have to go where your target audience is, and if that is on a mobile device, you should be there. Secondly the CTR might not be high on the mobile devices itself. But you being on the mobile might just increase the CTR on the desktop. If they have seen you in one place, they will recognize you in another place and convert in the third. Also Efficient Frontier looked at the differences with other major media types and that shows there is still a lot of ground to win on the mobile area. 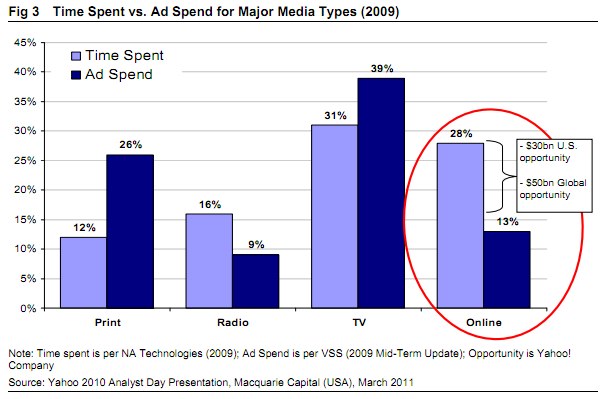