The State of Social Media: Social Networks and Blogs Rule

Research company Nielsen just released a new research they performed on the State of Social Media. Off course we like to cover anything with the sentence “State of” in it, but this truly is an interesting piece of research to absorb.

With Social Networks (Facebook, Twitter etcetera) reaching almost 80% of the active US Internet users, Nielsen found that Social Media keeps on growing in a rapid pace. And they are using it more and more from their mobile phones.

You can see the entire research below, or visit their very nice animated research page here, but I’d like to pick out a few highlights.

Nielsen’s research shows that Social Networks and Blogs still rule when it comes to attraction of online users. Together they stand for about 23% of the time people spent online. They are followed on a distance by online games (9.8%) and e-mail (7.6%). Nielsen specifically sees Social Networks and Blogs as one entity. I personally am not sure if that is the best way to look at it, but ok.

Search ‘only’ accounts for 4% of online time spent, which is a lot lower than other research shows.

It is not a surprise really, because women have always been the more social sexe. Just think of the stigma’s of women chatting in bathrooms and at the hairdressers. They have expanded, or moved, that chatting to online. The average visitor of a social network is woman, between 18 and 34, most likely Asian or Pacific Islander, lives in New England, has a Bachelor’s degree and has a household which makes a little under $50k a year.

So men are not on Social Networks? Yes they are, plenty of them! There are however only two sites which are dominated by men: Linkedin and Wikia.

We knew that Facebook was big. The numbers from Nielsen support that. In the top ten US web Brands visited in May 2011 Facebook gets about 53 minutes of time from each user. Yahoo (17.2 minutes) beats Google (12.5 minutes) while for example YouTube ‘only’ gets 9.1 minutes of attention. You would expect to be a videosite higher up here. 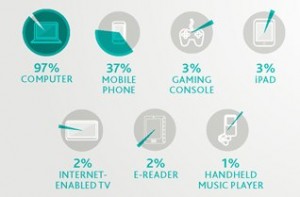 We have been saying for years that this would be the year of the mobile. Well, I’ve got news for you: mobile is already here, and its here to stay. The ability to access Social Media is the valued highly by the users as one of the features of their phones. Where 97% of people visit Social Networks on their computers, mobile is growing. Now 37% of consumers access Social Media through their cell phones.

The smart phones these days have apps, lots of them. Most of these installed apps are about gaming (67% has apps for that purpose), but also 60% of smartphone users have apps for Social Media.

From those Social Media apps Facebook is the most popular app to have, used mostly by those in the age groups 25-34. That doesn’t mean that that is the only active group on the web. More and more the older generation gets ‘into social networking’.

The Nielsen research suggests that it doesn’t just help your online status when you are active online in Social Media your offline influence will rise too. A nice extra for those active in Social Media is that they are 45% more likely to go on a date than those who are not active on Social Media.

Even though the research was focused on the US Nielsen also looked at worldwide behavior. In the UK for example they noted that Tumblr has the second most pageviews after Facebook while in Germany users spent a total of 12.7 billion minutes in May on Social Networks.

You can see the results from the research here: