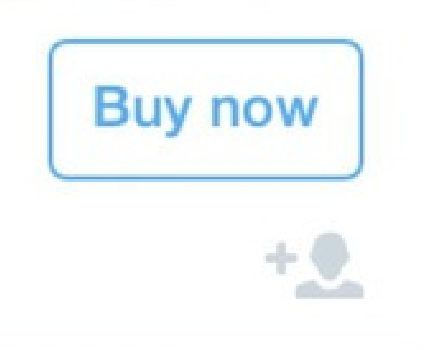 Update: we talked to Olivier Blanchard, author of the book “Social Media ROI” about this potential Twitter change. You can find his comment below. One of his quotes:

It has been said many times that Social Media is not the place to sell. People don’t want to buy on Social Media, they want to have fun. Yet businesses have always been looking for ways to make Social Media a selling platform. After all the audience is there. Help might be on the way now.

Re/Code (the new site which Kara Swisher and Walt Mossberg set up after leaving AllThingsD) yesterday was the first to report on a new feature which might change the scope of Twitter a lot: a buy now button. Re/Code discovered a mock up back in January so it seems that Twitter is taking the next steps now: testing it in the wild.

The ‘buy now’ button on tweets shows up only on the mobile stream for now, but since this seems to be a test it could be showing up anywhere.

The tweets, which have the buttons in them, are all tweets with links going back to a shopping site, Fancy.com. The buy now button (which is gone now, so don’t bother looking for it) directed the user to a check out page.

This suggests, that the site either is cooperating with Twitter or it is testing out things on it’s own. It however seems highly unlikely they would be able to get ‘buy now’ buttons into Twitter without the consent of Twitter in the first place so we can assume they are working together with Twitter, also because both parties are keeping quiet.

Why should we care?

Why is this big? For starters because this could be a business model which makes Twitter more valuable. From the start Twitter has been struggling to find the right business model and this would add to their value.

Secondly, and more important, this will open up new possibilities for selling on Social Media. As said, Social is not seen as a direct sales channel and this could potentially change things.

There are few brands who have made selling on Twitter a success, Dell being one of them, the question is, will this change that. Facebook has the ‘Offers’ option which isn’t extremely successful, but works. Do we think Twitter can top this?

Our very own Sarah Bradley comments on this development:

Twitter’s new timeline is more image and ‘call to action’ friendly than ever. Traditionally filled with text based updates and the occasional image, Twitter has been falling behind its competitors when it comes to image based advertising. Twitter’s current ‘sponsored Tweets’ or follower growth ads are fine, but they have remained static for the past few years – a change was needed.

Twitter needs to respond to other networks who are diversifying their ad content, Instagram, Pinterest, Facebook and Tumblr who are all cottoning on to social advertising with strong call to action buttons. While no one can predict its success due to the fickle nature of social media, I believe this is a step in the right direction. I just hope Twitter doesn’t lose its identity in a bid to become too much like other social networks; that will only alienate its customers.

We also talked to Olivier Blanchard. Blanchard is the author of “Social Media ROI”. Blanchard is quite excited about the potential of this new feature:

The great thing about this is that it isn’t intrusive. It isn’t going to change the Twitter experience for most users. All it does is add valuable (and overdue) functionality for commercial accounts that have been looking for a way to monetize Twitter.

It’s also opt-in, to a certain extent. It isn’t in-your-face. If you don’t want to buy anything through Twitter, you still don’t have to. But if you are open to it, it can help you skip a few steps in the online purchasing process. It’s the sort of thing that reduces obstacles to purchase, and that is typically a good thing for consumers. It eliminates a pain point for them.

For businesses, this is kind of a game-changer. Not a huge one that requires a marketing overhauls but a significant one, because it shifts the value of Twitter from being mostly a marketing and customer service channel but a true sales channel now as well. In other words, an investment in Twitter can more easily (or clearly) yield positive ROI for companies. And by that, I mean revenue, not followers and retweets. Real money.

Until now, most businesses were scratching their heads about the platform. Its impact on sales was difficult to gauge (when companies used it as a sales channel at all), and you could sort of tell from how weak engagement and content had become. As a true business development channel that can be used for customer acquisition and retention, technical support, advertising, marketing uplift and now sales, it has real value for advertisers looking to attract impulse shoppers and opportunistic buyers. Being able to easily track what sales came through twitter is going to be pretty nice for companies too. If I were a sales manager or a product manager somewhere, I would be doing a happy dance right about now.

As for consumers, I think it’s great. It changes the value of an account. Say I am a runner and I spend quite a bit of time every week looking for sales or special offers on running clothes. Following running-oriented retailers a little more closely on Twitter will now allow me to be notified whenever a particular type of item I was looking to purchase in the next few months is on sale. Because Twitter lives on my phone, once I follow the account, the discount comes to me all on its own, and I can just buy it right there and then. Convenient, fast, and simple. It doesn’t matter of you’re a tech retailer, a car dealership, a coffee shop or a restaurant: a ‘Buy Now’ button on Twitter makes it easier for consumers to discover and buy your products, AND share your Buy Now link with people they know will find it valuable.

It’s clever. Twitter should have done this years ago.

Let us know your thoughts in the comments below, on our Facebook page or on Twitter and we’ll add it to the discussion here!