Google Panda update – communicated as an algorithm update designed to de-prioritise sites that were deemed to be low on user trust, sites that lack original non-commercial content, and sites that create, or copy content as something to chuff around commercial content. Live end of February in the US and rolling out to the UK April 11th/12th with seemingly a major target in the crosshairs – that being the price comparison sector.

Well SearchMetrics, and Sistrix, in their “visibility” analysis which was neatly summarised on Holistic Search (more on “visibility” later). However I have my doubts as to the true business impact to the price comparison sector, having worked closely with many of the sites reportedly affected. In addition whilst there’s a lot of popular media coverage about the 94% drop in “search visibility” reported for Ciao; there’s yet to be a formal statement from Ciao themselves. Plus eHow owners Demand Media; in a statement issued yesterday are keen to point out some cautions about the measured data…

“Certain third parties that have published reports attempting to estimate the effect of recent search engine algorithm changes made by Google on traffic to the Company’s owned and operated websites have significantly overstated the negative impact of those changes on traffic to eHow.com, as compared to the Company’s directly measured internal data.”

Here are a couple of points about search visibility: 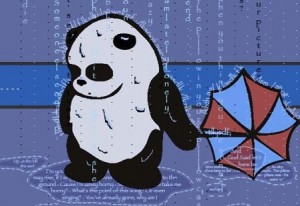 According to SearchMetrics, their report tracks “millions” of keywords from the short and long tail. Sistrix don’t make much reference to the query range, but regardless one million terms is an enormous data-set, and would surely cover a very broad range of types, one would imagine. That said there are still a number of important considerations;

1. Visibility doesn’t necessarily correlate with visits and certainly not revenue. Price comparison sites get paid when a user clicks on a commercial listing – be that commercial listing a sponsored link from Google or Yahoo! or a merchant ad.

Driving traffic to the “money” page, as opposed to a content/review page is therefore far more valuable – as average page yield is far higher, and those “money” pages are geared towards the end of the user decision. Perfect long-tail stuff! I’d argue the volume and revenue driving term mix, to the price comparison sector is majoratively long, to super-long tail and specific in query-type.

2. Both reports look at average CTR by position. Notoriously difficult to legislate for, this measurement is in this case less effective because the Panda update took (according to the Google official blog) user feedback into consideration; even “…in some high-confidence situations, we are beginning to incorporate data about the sites that users block into our algorithms”.

If I’m learning photography and I search for “camera lenses” I could be looking for information about different types of camera lenses and the type of shots I can take with them. In which case I wouldn’t click on a price comparison listing should one appear in my SERP, and I’m not even sure normal users would. Such sites are prolific, well branded and probably known to most users and in pretty much all cases don’t cater well for informational query types.

That these sites may ever have appeared for a range of short tail queries cannot be assumed to be indicative of user interaction at a rate inferred from broad result-by-position data.

3. Could the balance of term visibility drops be weighted towards the short tail? I.e. Comparestoreprices.co.uk has a “visibility” drop of 78% on the range of terms measured by Sistrix. What if that 78% drop is composed of total fall-out on the short-tail terms measured combined with a hold-steady on the long tail – which I’d stake my reputation on being the real volume and revenue drivers anyway.

If I search for any long tail end-stage transactional query including the word “compare”, I normally always get Comparestoreprices.co.uk right at the top of page one. Try “compare cheapest cordless drill”, “compare washing machine prices” or try a few of your own combinations. I’d argue that the volume and revenue driving term mix for this site was historically weighted towards such terms – with almost certainly, a term-in-domain boost. Even so, any long-tail, end-stage transactional query is still a price-comp heavy SERP, with Comparestoreprices.co.uk often featuring regardless of the use of “compare” in the query, e.g. “cheapest indesit washing machine”, “cheapest dualit toaster”.

I wanted to sanity check my suppositions at source, and spoke to Jonathan Stewart, Head of Search & Social at Review Centre, who certainly supported my thoughts on the term mix. According to Stewart “We have seen some drop in our traffic from Google; but the data from both SearchMetrics and Sistrix bears little to no correlation to volume and revenue driving terms at this end.”

1. Many price comparison sites buy a chunk of their traffic from Google, Yahoo! and MSN/Bing, therefore their organic search visibility impacts only one traffic generation route. Many of these sites employ an arbitrage business model; purchasing long-tail keyword ads on one engine source, and profiting where a margin of positive difference exists on the landing-page commercial-listings (which may be another, or even the same engine source.)

Such activity means that the total visit-driving (and revenue driving) query mix, is heavily skewed towards the long tail. 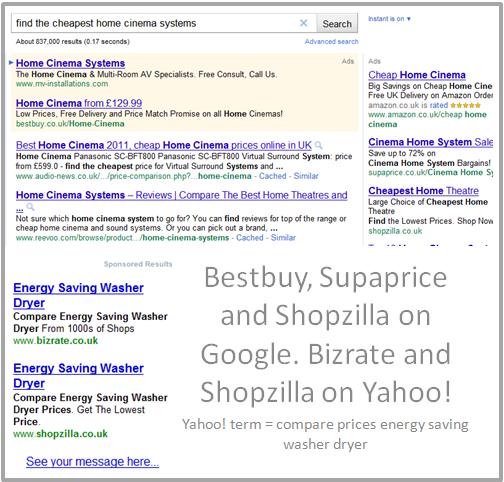 Disclaimer: Whilst we can see a number of price comparison sites advertising on paid search in the example above, I cannot infer from that, that any or all of these are applying an arbitrage business model to their bid strategy. What I can infer is that organic traffic is not the only traffic generation method, and that the total term concentration is highly likely to be somewhat skewed as a result of this.

The final thing I’d like to pour water on is the myth that AdSense is a seemingly common factor with most and most-heavily “Panda-popped” sites. 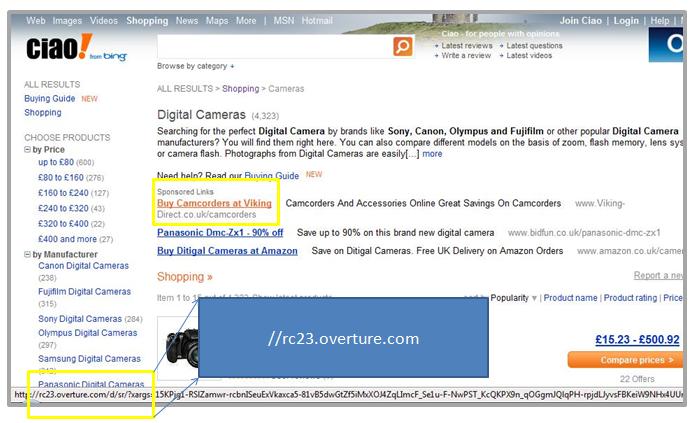 Secondly, I suspect the remaining price-comparison sites are part of the Google Adwords search partner network. AdSense ads are served off the doubleclick server (do a mouseover on any publisher AdSense implementation). Search network partners appear to be served from google.com. Admittedly these ads could also be “AdSense for Search” which appears to be messaged as the same thing. I can find Google references to Amazon.com for example, as a “Search Network Partner” in Adwords Help – and also referenced as a “AdSense for Search” partner. Regardless of Google external product messaging, I think it would be extremely useful to know if the Google ads we see on price comparison sites, are pulling from the Adwords bidded marketplace. 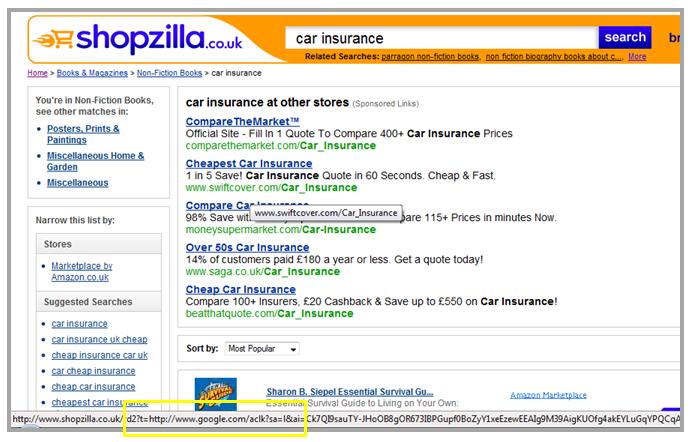 Unfortunately I don’t think I can unequivocally prove this save than to notice a marked similarity between the ads shown on these sites, and the ads shown on Google.co.uk for the same terms. (Note that the running order and visual appearance of all search listings on Google as opposed to partner sites will always be different due to the many personalised and more sophistocated tunings that are applied to ads served on Google, due to the learnings from data feedback – whereas off-network is one-size-fits-all). If anyone can help me prove this either by unpacking the query string, or running some referral tracking tests or similar, that would be interesting.

Assuming these are pulling from the search marketplace, if there is some drop in visits to the price comparison sector on the terms on which these sites are deemed to deliver a poor user experience; then it might be reasonable to infer that there will be some increase to the quality of traffic delivered by Adwords (through partners.)

In summary, whilst there has surely been some impact to some sites in the price comparison sector, I’d argue that this is not as volume or revenue limiting as either SearchMetrics or Sistrix data might suggest. In some cases, such as Comparestoreprices.co.uk I’d argue there’s been little to no impact at all. Finally; if the balance of terms on which visibility for these sites have dropped is short to mid-tail, then that is a win for user experience, and has a potential knock-on impact to Adwords traffic quality too. 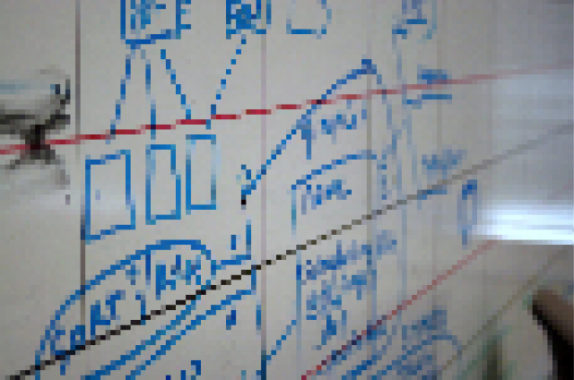