A rather nasty situation happened recently where a number women on the London Underground were handed a note saying that they were a “fat, ugly human” and a strain on the health service. This horrible act, carried out by a cowardly group was covered extensively in the news and there was quite rightly outrage and anger about the situation across social media.

Yet by reacting quickly to the situation, plus size fashion brand navabi created some great coverage for themselves. After the story broke they handed out flyers with the words ‘You Look Great’ on them, to people travelling on the tube. The same flyer was also available to print out via their Twitter page and on the domain www.overweighthaters.com (the group handing out the original messages called themselves Overweight Haters Ltd which navabi promptly registered).

We’re getting cards printed & going to Oxford Circus to give to people. Feel free to use & do the same if you like ?pic.twitter.com/IeU7eIuUzC

Taking this negative situation and creating some positive emotion worked fantastically for them. They gained a large amount of free PR from hugely authoritative news websites (here’s an example from the Evening Standard) and saw a boost to their social media following as shown in the graph below. 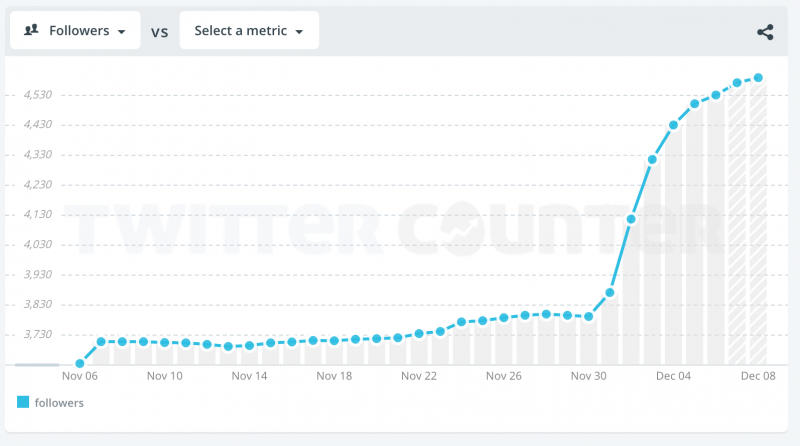 I’m not saying that they did this for solely PR and marketing purposes (perhaps they are not as cynical as me). However this is just one of many examples where reactive marketing has worked well for a brand. Even though the majority of their reactive marketing activities were offline, it gave them great digital benefits.

Because of the nature of social media, it’s easy to reach a vast audience almost instantly after an event or situation has taken place. There are plenty of examples of brands that have done this well, but one from Oreo certainly takes the biscuit (pun completely intended).

This example happened a couple of years ago, so you may have seen this before. However I believe this is the best example of showing the power of reactive marketing. 2 years ago during the Super Bowl, there was a power cut in the stadium during the game. The players were plunged into darkness and the game was put on hold for quite some time.

In just a few short minutes Oreo took advantage of the blackout and released this tweet:

Power out? No problem. pic.twitter.com/dnQ7pOgC

Very quick, very clever and it received an overwhelming response from users on social media. However on top of that, it gained some great PR from highly authoritative sites such as The Wall Street Journal, Huffington Post and Buzzfeed just to name a few. But more importantly were the results. In a video interview for AdWeek, the creator of the ad explains that in just the first hour the post got 10,000 Retweets, 18,000 Facebook Likes and 5,000 shares. This added up to an unbelievable 525,000,000 earned impressions. That is 5x the amount of people that actually watched the game. These results were completely organic – this was not a paid or sponsored post. And all of this during an event where it costs $4 Million for a 30 second slot on TV. It was not the Baltimore Ravens who won Super Bowl XLVII, it was Oreo.

Can reactive marketing do more than just give me some cool social media stats?

I’ve already mentioned in the two previous examples that the reactive content generated some great PR. The majority of this PR came from highly authoritative news or industry related sites. This can often mean links, which all SEOs know are rather important.

Last year when the news broke out that Tesco overstated their profits but the small amount of £263m, myself and a couple of colleagues instantly set to work on some reactive content. Rather than create a cool graphic or witty social post, we created a microsite that housed an interactive infographic.

(I’m going to point out that I’m aware that we spelled trollies wrong. Unfortunately we realised this after we bought the domain and had already promoted the website. Most people don’t notice this tiny error, but you’re a smart bunch so I’m willing to admit my crime against the English language to you now.)

It simply showed a user how much of a certain product (we picked 10) could be bought from Tesco for £263m. We made sure to relate that statistic to something in order to make it a little more interesting, but it really was as simple as that. It took one day to come up with the concept and to do the math (my boss was rather worried when I told him I only had a B at GCSE) and one more day to design and develop the site.   After a small amount of outreach and promotion on social channels, we received some great feedback and were picked up on social media by large companies such as Confused. However more importantly we got some great links that we were looking for. A number of links came from high authority, industry relevant sites that either dedicated an article to the piece or featured it as part of a larger article that was highly relevant to our target audience. Here’s some examples of links we got from The Drum, Content Marketing Institute and Brand Republic.