As a blog owner who writes about search engines you immediately wake up on signals like that. What did Google do now? Which change did they make? So with excitement I started reading the article on the Wall Street Journal entitled “Google Gives Search a Refresh”. Here’s something big again! While reading the article I however got less and less excited and got more questions than answers out of it.

What is going on?

The Wall Street Journal today reports on how Google is going to change things around. They state that :

“Over the next few months, Google’s search engine will begin spitting out more than a list of blue Web links. It will also present more facts and direct answers to queries at the top of the search-results page.”

The Wall Street Journal claims Google is going all Semantic on us. Which goes a lot further even than the current Search Plus Your World. Google is supposedly going to give us direct answers in the SERPS, hereby surpassing websites. That would mean it would get closer to Bing. 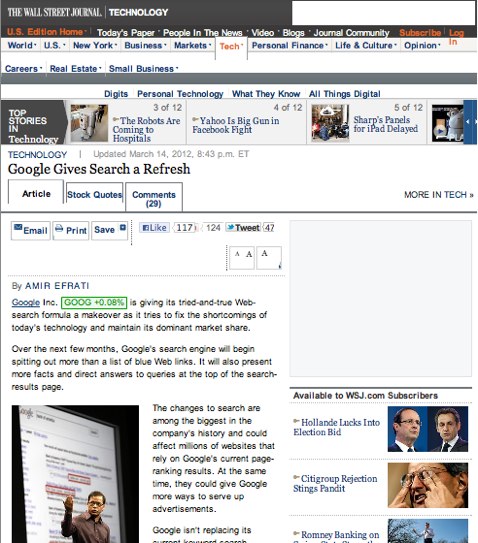 What is new here?

The question is, what is exactly new here? The way the Wall Street Journal brings it it looks like we are getting a brand new Google in the coming months. But If you think about it, aren’t we already in the middle of that process?

One thing which the Wall Street Journal does is point at Amit Singhal. He says that Google:

“will better match search queries with a database containing hundreds of millions of “entities”—people, places and things—which the company has quietly amassed in the past two years.”

But in fact isn’t that exactly what Google is already doing? Google is trying to get a grip on us as persons, and with the information they are gathering about us they are trying to give us more relevant information, in a sort of semantic way. They are not there yet, but they are pretty far under way.

When it comes to surpassing websites and giving us direct results: they are already doing that also. Take the weather for example, or flight times. They show up directly in the SERPS, you don’t have to do one extra click at all.

So what exactly is new here?

The problem with the Wall Street Journal article 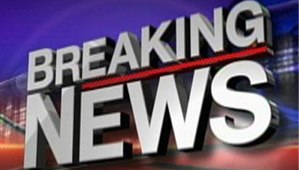 Herein lies the problem with this article. There doesn’t seem to be a lot of actual new things in there.

The article is based on an interview with Google’s Amit Singhal. One of the problems is that the Wall Street Journal is very vague about that specific interview. Did they talk to Singhal himself?

It doesn’t look that way. It seems as if they are interpreting the words of Singhal last week at SXSW. That hunch becomes clearer when halfway through the article they state:

“A Google spokesman declined comment about the potential changes.”

The Wall Street Journal is a well respected newspaper and they bring some great stuff out, but I do believe they are kind of wrong here. They are not bringing actual news, they are connecting the dots.

Which is not bad at all, after all, that is what we do too. But the way it is presented here it sure looks like they are bringing us breaking news. And you can see that too. Other (major) sites blindly take over the Wall Street Journal’s conclusions. Even world wide the news is now spreading that Google is about to make a big change.

They are not, they are in the middle of that change!

Are they completely wrong?

So is the Wall Street Journal completely wrong? No, their hunches are quite right, Google is changing and is getting closer to what Bing calls themselves: a decision engine. And yes we will be seeing a lot more changes, and it won’t surprise me if that is pretty soon too. But the way they put this out there is not correct.

I just spotted that Danny Sullivan over at Searchengineland has come to a similar conclusion. He extensively explains what is going on and blames this on a PR push by Google which has gone crazy. It could very well be that.

In the meantime: keep your eyes open for changes within Google, because they are coming, but be careful with what the Wall Street Journal says here.