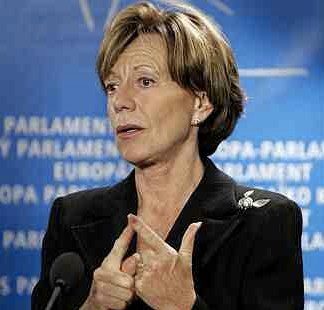 She has a reputation of being the iron lady and many Dutch believe she would be the best choice to become the next Dutch prime minister. But Neelie Kroes believes she has a job to do at the European Commission. And Social Networksites might regret that Kroes didn’t want to become prime minister. She has started her crusade or should we say “Kroesade”.

Where in her last job as euro kartel commissioner Kroes went after companies like Microsoft in her new job she’s after the social networksites like Facebook, Google Buzz and Hyves. Recent developments with Facebook and Buzz must have attracted attention in Brussels.

In a debate in Brussels Kroes was quoted yesterday that she was going to be ‘more tough’ on the networksites in regard to privacy matters. She said this in a discussion on the proposal where sites like Facebook will be forced to put profiles of minors below the age of 12, standard on private.

The EU also wants the sites to be more open about the subject and better warn the users for the risk of sharing personal information.

What would this mean?

Apart from the question how the networksites will have to implement this if it is only allowed in Europe, the big question is, if this becomes reality, what will that do for the popularity of the sites? One of the reasons the sites are this popular is that people can look on other profiles. For some it will convince them to actually start using it.

And isn’t the fact that you can make new friends easily one of the benefits of using a social network? What the sites are essentially doing is making it easier to connect with friends and friends of friends. If a part of that is taken away, where’s the benefit of it? Maybe it won’t be as bad as this because it is only meant for the under 12 year olds, but still, its something to think about.

One thing which in my opinion is much more important is being clear about it. So using Facebook means your information is public. That shouldn’t be a problem, as long as you KNOW what you are doing. And as long as you know the risks. Thats where I definitely agree with the proposal. Sites should be much more educating towards their users. Now it feels like the dealer who first gets the junkie hooked and then tells him its bad for him. It should be the other way around.