StateofDigital were recently approached by WebMeUp, a new web-based SEO reporting tool. Having previously written a number of reviews of new, exciting and affordable tools that I had come across, I stepped up to give WebMeUp a whirl and see what it offers. This post is next in my mini-series of reviewing some of the lesser known, yet still great, digital marketing tools that I find on the web. I’m going to take a dive into the features that WebMeUp offers, and give my 2 cents on what it stacks up like compared to the many other tools out there.

Perhaps a feature that I’m most excited about is the crawl feature. The reason for my excitement is that many tools I have dealt with previously often sell themselves on this, however in actuality they don’t go as deep as I would like. 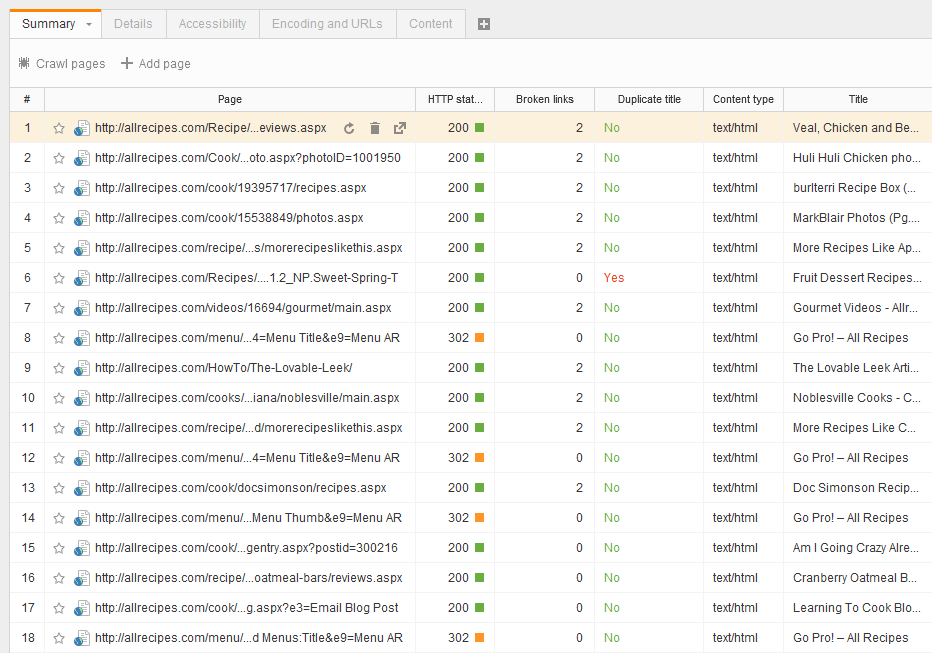 As you would expect with an SEO reporting tool, WebMeUp also offers you the ability to analyse your website’s backlink profile: 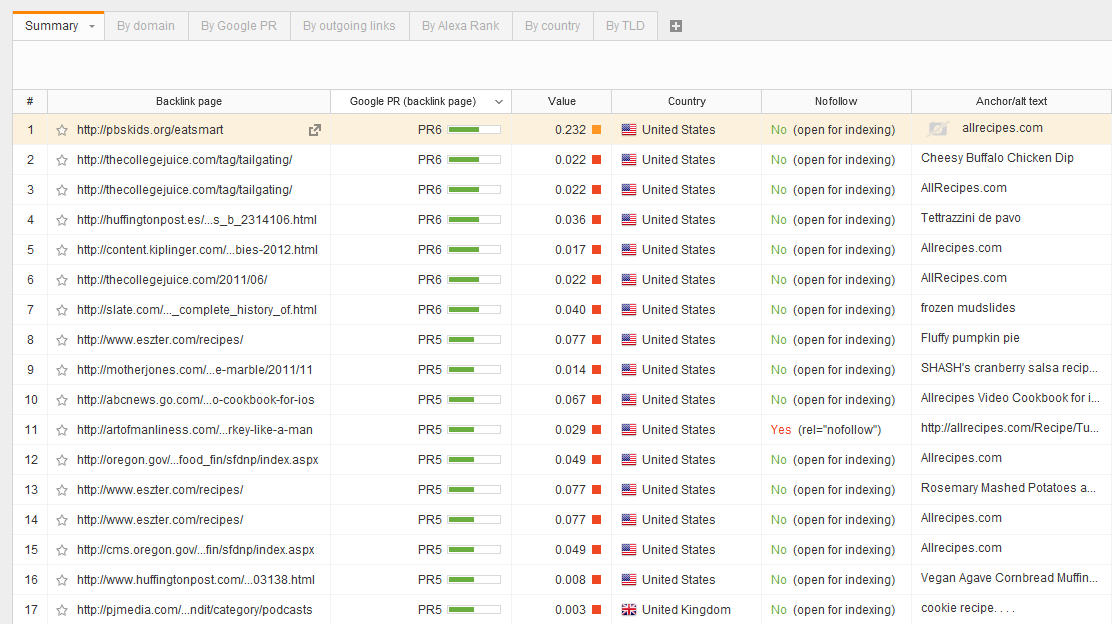 While a fairly standard expectation of an SEO tool, I have to say I quite like the way WebMeUp reports this data. Collecting loads of useful backlink information (domain age, country, anchor text, link value, etc) into a clean, easy to navigate list. I’m also a particular fan of the clean, uncomplicated UI of the WebMeUp interface (something which has been something of a pain point for me with other tools): 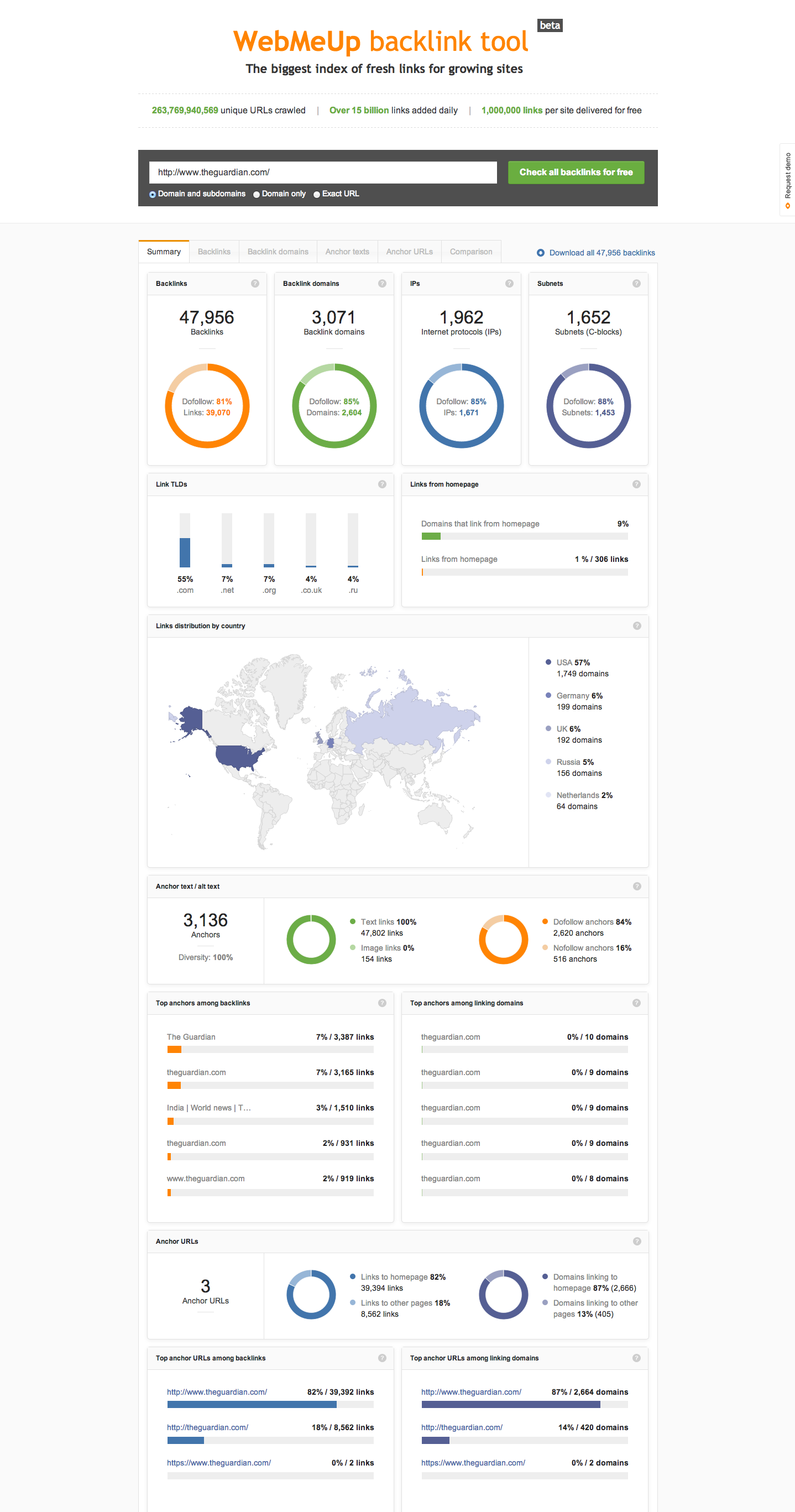 WebMeUp also allows you to manage your backlink campaigns by assigning tasks, recording acquired links and setting up automatic link monitoring. Much like the way that Buzzstream and Linkdex handle this feature, it allows you to label potential and actual links, check whether or not the links are dofollow (or not) and that they have the appropriate anchor text:

You can also view top backlinks to a given domain, identifying important aspects about each link (nofollow/not, anchor text, URL, PageRank, as well as with other tools WebMeUp provides a Page Strength indexation score):

One tool that I’ve always loved is the Moz On-Page Grader Tool, however the inability to monitor changes over a bulk upload list of pages eventually drove me away from this. Seeing a ‘hit list’ of all areas where you can make changes to optimise your pages is super useful, particularly when it shows information on: accessibility, structure, encoding factors, potential duplicate content issues, missing title tags, and more. I think this is a very useful feature:

This is similar to a feature that I use in Searchmetrics often when optimising on-site and technical SEO issues: 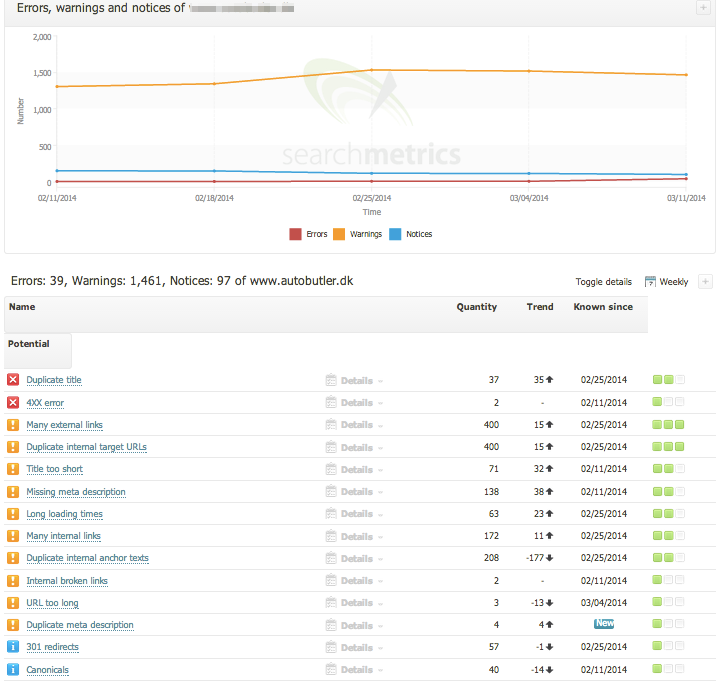 The keyword research feature seems okay, allowing you to refine your search by keyword popularity, length, competition, and more. A nice touch is the ability to get keyword suggestions from 3rd party tools (move over Ubersuggest!): 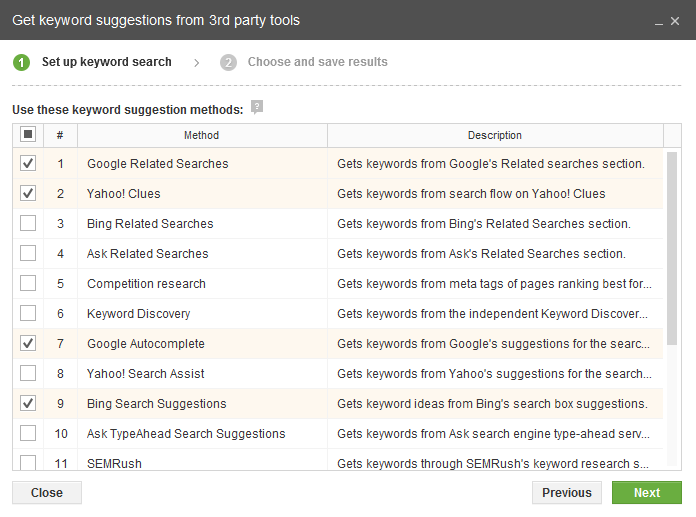 Whether or not you’re still stuck to tracking your rankings as a key metric aside, you would be surprised if this feature wasn’t offered by any SEO tool worth its salt: 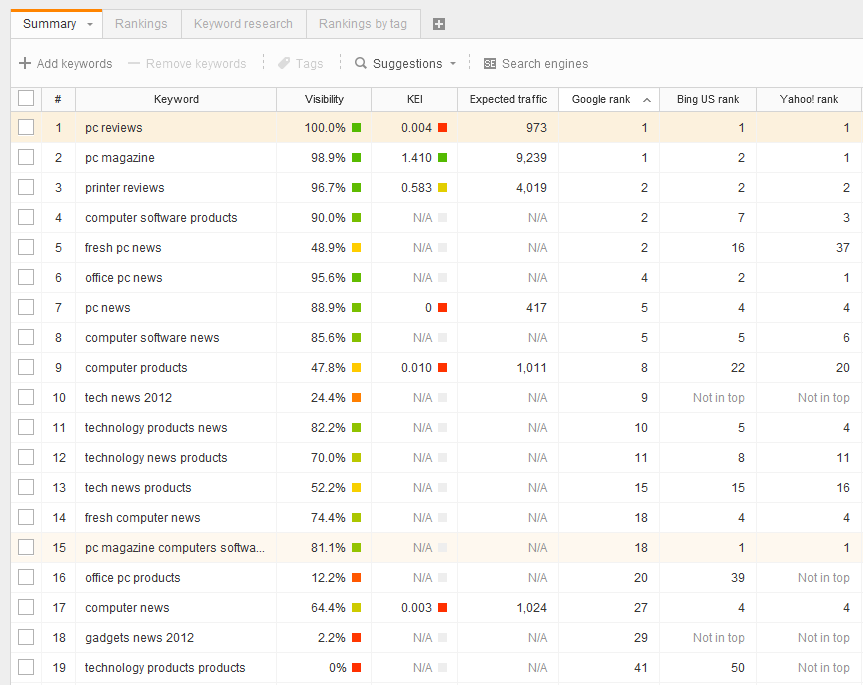 You can also graph the visibility against competitors using the keyword visibility report:

The competitive analysis feature seems a little light on the areas of comparison. While you can view metrics such as: domain age, number of indexed pages, SEO visibility, load time, and social media share activity, other areas that are a little less useful (in my opinion) are the more general stats like: Compete traffic and Alexa Rank.

Less of a major feature, but WebMeUp offers the ability to tag your keywords across multiple projects, whether for topic, industry or sales/conversion efficiency.

As with other tools, WebMeUp also allows you to customise your dashboards with a fairly feature filled widget builder, personally I’m a big fan of this feature (as I am with the overall UI of WebMeUp), it’s clean simple and has been built up fairly intelligently allowing you to customise by dragging and dropping:

Choosing to populate your dashboard with widgets picked from the widget gallery:

So, after getting under the surface of WebMeUp, what are my overall thoughts of it as SEO software? Let’s start with how much it costs…

There are a number of price ranges, starting from as little as $19.95 , which although limited, may suit any budding SEO freelancer (that’s only 14 EUR), other price brackets grow with the amount of projects, pages crawled, keywords tracked and competitor links analysed: 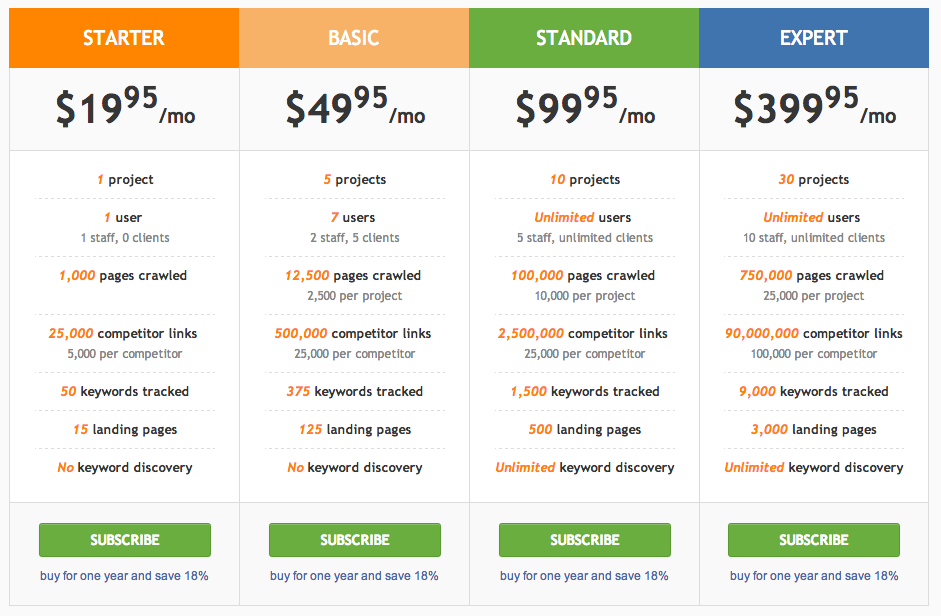 Alternatively you can customise your plan to suit exactly your needs: 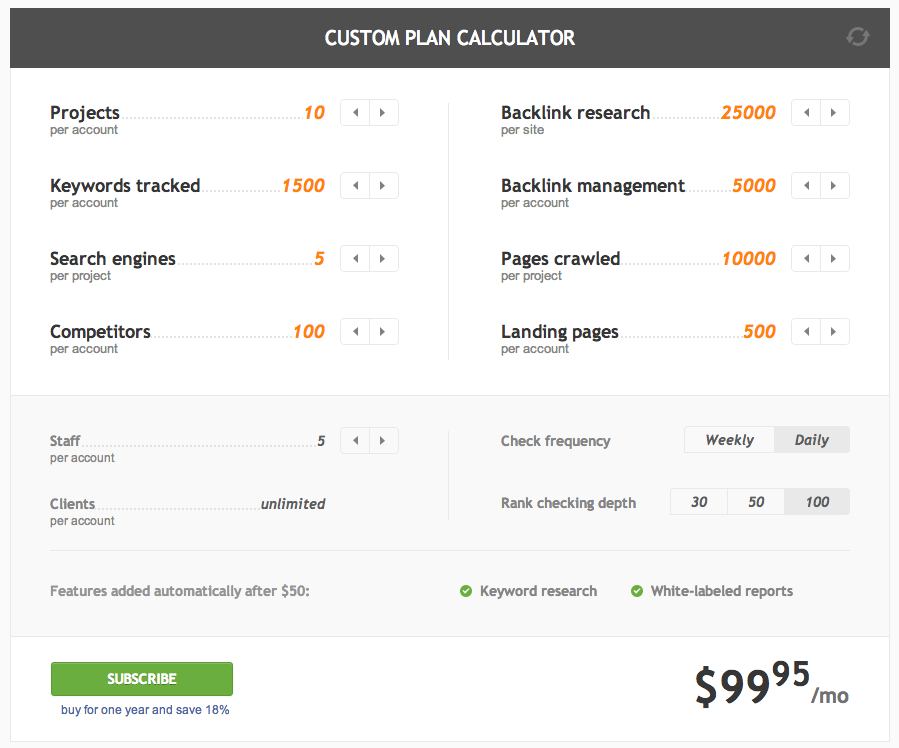 Interestingly enough WebMeUp have conducted their own comparison between some of the other major SEO reporting tools out there, including (My SEO Tool, SEOmoz, Raven Tools and Searchmetrics). You can see this comparison below or in more detail here: 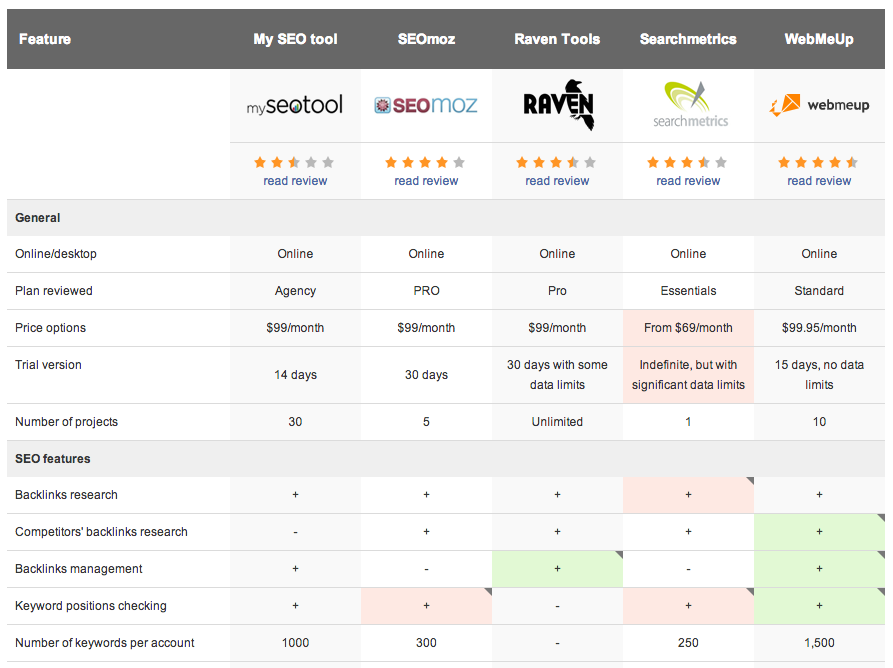 How WebMeUp stacks up against the competition

What I like about WebMeUp is that there has been a very dedicated effort to focus on the user. I have used a large selection of SEO monitoring software over some 5 or so years, and I must say that from the moment you log in everything is very understandable and easy to use. On-screen guides indicate what information that you’ll find under different areas of the software.

What’s more there is a vast help section, filled with a large amount of training guides and video content that has clearly taken a large amount of effort to build up. An example of this is the (actually really rather good) SEO checklist, you can download this by clicking the image below: 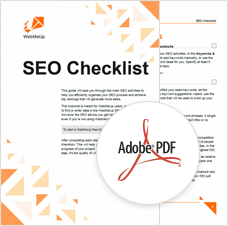 In particular I must say, this particularly impresses me. Not mentioning any names, but some of the very well known market leaders could learn an awful lot here… It helps those who may not be as well versed as others to get the most out of the tool:

A nice touch I also noticed was the handy user sign-posts and notifications updating you on the status of various actions that you have conducted: 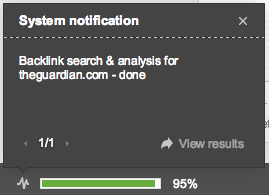 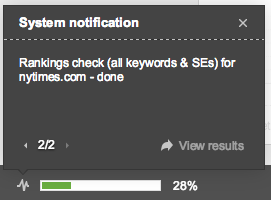 In my honest opinion I think that WebMeUp offers a lot of features that are available through a variety of other tools (some free, most paid). One thing that WebMeUp does well, which I have a lot of time for, is that it just presents the information in a better and easier-to-digest way. Whilst this may work for some people, part of me is left wondering whether or not it is truly different from the other options out there. Honestly, I can’t say that it is.

But don’t let this put you off. WebMeUp is affordable, offers a variety of great features, a very easy-to-use interface, and I would actually rank it toward the higher end of my list of recommendations.

What WebMeUp is Missing? Are there any Downsides?

Only a slight thing, but I have to say that while the interface was generally super quick, I did have the odd occasion where I was presented with a screen like that below:

Although I don’t see this as a major problem, I’ve experienced the same with a lot of other tools too, after all they are dealing with a large amount of data, but maybe I’m just impatient…

It doesn’t appear that WebMeUp is missing any features that I would particularly seek out, other than the notable SearchMetrics domain visibility graph (which I know I, as well as a number of my peers utilise regularly): 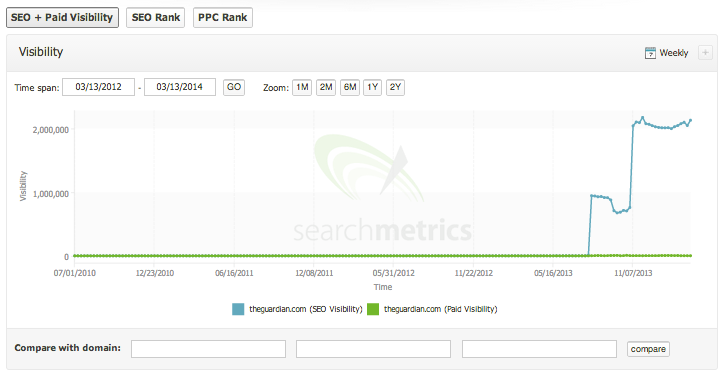 After reviewing the tool I communicated with WebMeUp asking one important question, who do they believe is their target audience? Their response was as follows:

“As our target customer we see both SEOs promoting their own websites and SEO agencies who do large-scale SEO, that’s why pricing plans start from 1-project plan and go up to 30 projects (or 100 projects for custom plans), in this way everyone can find most suitable plan for their needs and wallets, we believe.”

Ultimately I really think that WebMeUp is a likely alternative to Moz, AnalyticsSEO and Raven Tools in particular, but maybe Ahrefs (although I haven’t used Ahrefs beyond a very cursory glance). I believe it is less so a direct competitor of Majestic SEO and SearchMetrics as I believe MajesticSEO’s main strength (link analysis) lies in a different area than WebMeUp is aiming for, and that SearchMetrics’ visibility graph (shown above) as well as a host of other features offered by SearchMetrics puts it in a slightly different bracket.

That said, I must say I’m a fan and would strongly consider using WebMeUp myself. The real question is, will the features on offer that I’ve explored in detail in this article convince you enough to move from your existing SEO tool? I’d recommend starting by signing up for the generous 15 day trial and see for yourself…

Let us know your tools of choice in the comments below