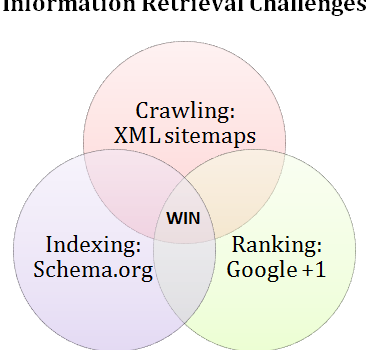 We’re doing Google’s job for them

You’ve all heard about the Google +1 button and the recent Schema.org announcement. Big news, both of those, but something is rubbing me the wrong way about all this newfangled stuff Google is pumping out. Namely that Google is getting us to do the hard work for them.

Google, as a search engine, exists to find all the information on the web (crawling), make sense of what it finds (indexing), and serve us with the most relevant content for any given query (ranking). This, in a very simplified nutshell, is Information Retrieval, and it’s what search engines do.

However, it seems search engines are actually quite poor at this. Or at least poor enough that they think they need us – the masses – to do the hard work for them.

XML sitemaps: crawling
First there were XML sitemap files. Google got website owners to provide it with a clear and nicely formatted list of all the documents the owners want crawled. This basically solves any issues Google might have with crawling webpages.

Schema.org: indexing
Now look at Schema.org. This semantic mark-up is basically solving the whole indexing hullabaloo for Google. Webmasters now tag up their content in such a way that search engines no longer have to do any difficult analysis to determine what that content is about. We’re plainly telling Google that content A is this and content B is that.

Google +1: ranking
So with crawling and indexing solved, Google only has to look at the last piece of the search pie: rankings. Since its inception Google has looked at a webpage’s link graph to determine what pages to rank highest. This is an increasingly unreliable signal, with a skewing of the link graph due to SEO linkbuilding and the increasing cannibalisation of links by social media.

Enter Google +1. Why do the hard work, Google thought, if we can just get users to click on nifty buttons and thus tell us which pages are cool and which aren’t? And voilà, the ranking problem is solved too.

So, as webmasters and SEOs, in our continued efforts to please the Google Overlords we’re being recruited in to doing Google’s work. We give Google the webpages it needs to crawl, the content it needs to index, and the signals it needs to rank.

One could argue that this is what SEO has always been about: making websites easier to crawl and index, and providing ranking signals to ensure high positions in SERPs. Now Google is giving us new tools to do that.

But the problem I have with all this is that we’re basically doing Google’s hard work for them. These ‘tools’ Google is giving us hint at an information utopia Google wants to achieve, in which it can lay back and lazily crawl the web with all those countless little webmasters and SEOs scurrying about to ensure all the information being published is crawlable and indexable and have all the right ranking signals.

That way Google doesn’t have to do any of the complicated stuff, like determine context and relevance and filter spam from its SERPs. You know what? I don’t want to do Google’s job for it. Let them struggle and suffer and sweat at it. Let them work for their continued success. After all, we have to.

The next Google is the search engine that just gets it. Because Google doesn’t, not any more.