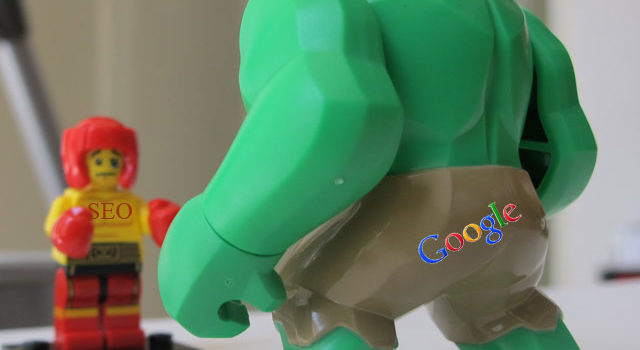 What Google Wants vs What SEOs Want

A recent image shared by Carla Marshall from Sorbet Digital demonstrated to me how adversarial the relationship between Google and the SEO industry has become (see image below).

Google is basically waging a propaganda campaign of fear, attempting to weed out SEO agencies that use tactics Google doesn’t agree with by fueling paranoia and suspicion in our clients.

When I tweeted this image as evidence that Google really isn’t our friend, I naturally received some opposite opinions. Many believe that SEO and Google’s goals are perfectly aligned. Obviously, I don’t agree with that.

First of all, we need to be clear what Google’s goals are. Google wants to serve the most relevant search results for any given query, to ensure users keep coming back to Google (and click on Google’s ads).

That’s the first area of tension between SEO and Google, and one that SEOs have precious little say in. Google shows what it wants to show, and SEOs are left to try and ensure that their own client site’s properties – website, G+ page, or any other online asset – are as visible as possible on those SERPs.

Then there’s a second area of tension between SEO and Google, which is more intricate. It’s the difference between what Google intends to show – i.e. the most relevant results – and what it actually shows – algorithmic approximations of relevance and authority.

Google’s algorithms aren’t perfect. They’re pretty damn good, but flawed nonetheless. And that means they can be manipulated.

This is where SEOs differentiate themselves in to roughly three categories. Some SEOs adhere purely on Google’s intentions. These SEOs focus exclusively on ‘great content’ and the best practice guidelines Google publishes. These SEOs are banking on the long term value of their efforts, and most likely (if they’re good enough) they’re pretty successful at it, given enough time.

Other SEOs focus purely on the means by which Google generates its SERPs, regardless of what the search engine’s guidelines say. We tend to think of these SEOs as ‘black hats’, and there are varying degrees of manipulative tactics at work here. From link networks to cloaking, automatic content generation and comment spam – these SEOs knows what it takes to get sites to rank, and ‘great content’ is not high on that list. Short term gain is the dominant objective for these SEOs, as they know sooner or later their sites will get burned. (More often ‘later’ rather than ‘sooner’, as black hat tactics often enjoy remarkable longevity – remarkable at least to those who believe what Google says.)

Then there’s a third type of SEO: those who combine the aforementioned tactics. These SEOs understand Google’s long term goals and cater for it, but not to the detriment of short term tactics. They combine solid content strategies with ‘shady’ link building activities, and they probably use structured data in ways that Google doesn’t agree with. These, I believe, are the most effective type of SEOs. They’re aware of what it takes to build lasting value, but they’re not naive enough to swallow Google’s propaganda wholesale.

Each of these three types of SEO believes wholeheartedly in what they’re trying to do, and each of them believes that what they call ‘SEO’ is the one true definition of the craft.

That’s an argument that’ll probably never be settled. Suffice to say that as long as you provide lasting value for your clients, as far as I am concerned the means by which you do so are irrelevant. As long as you understand that what Google wants and what you as an SEO are trying to do are not always happy companions.

“Understand that what Google wants, and what you as an SEO are trying to do, are not always happy companions”
Tweet this quote