Skip to content
Home » Articles » Uncategorized » What is Google+ Really all About?

What is Google+ Really all About?

Google+ is Google’s Social Network, or at least, that is what we all think it is. It is Google’s effort to push out Facebook and to be the biggest not just in search, but also in social. But in fact Google+ is not intended to be that Facebook killer. Yes, off course, if Google gets the chance, they will definitely try to beat Facebook. But Google+ in fact is more about data: it will be part of every Google product in the future.

If you listen carefully to what Googlers are saying you will get some nice insights into what the intentions from Google are. They are going to change the online world with Google Plus and the crux is data, identification, personalization and integration.

Note: this post has been edited since it first was published in July 2011, just after the launch of Google+. The essence of the post is still the same, but information which enriches the post has been added. 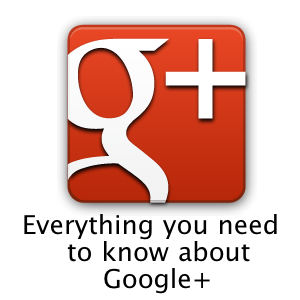 It wasn’t even ready, why launch?

It was a remark made often jut after the launch of Google+: “Why did Google launch Google+ now? It’s not finished! We are missing features. They should have launched a fully working product! My mom or dad will never switch from Facebook like this.” Is this a valid point? Well maybe, if you would look at Google+ as a product in the lines of GMail, Buzz or Blogger. But you shouldn’t. This is not a product, but a project, this is much bigger.

Bradley Horowitz, one of the leaders of the Plus-team, told AllThingDigital:

“We’re calling this the Google+ project for a reason. It’s not a monolithic product. This is a project and when we say “project” we mean it’s much broader in scope. This is something that will impact Google.”

Google is going places with this project. And that is why they are taking this project one step at a time. We have seen many signals in the last year or so of Google heading in this direction. They have been dropping ‘social layers’ on us. The ‘pimping’ of the Google Profiles was an apparently small but very important step but also the “shared by” options you see below search results are an indication of where things are heading. The launch of Google+ was a next step, and this time it was a huge one. But also one which couldn’t be postponed anymore. When you’ve read Stephen Levy’s article on Wired you will know that Google has been working on this project for a while now. There had been many Googlers testing this. That is nice, but at some point you’ll need to test on a bigger audience. And that time had come. To really test Google needed the ‘real users’ and not just the Googlers, so they opened Google+ for the public. 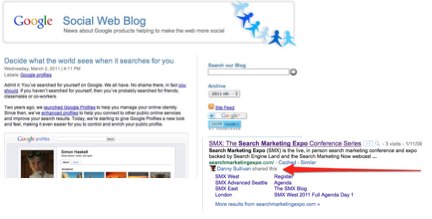 Google has been known to test their stuff “in the wild”. The black bar which we now see on top of all Google products is an example of that. In this case testing like that was impossible. Word would have gotten out immediately. So Google decided to roll it out, even though they were not in ‘full mode’ yet. But it fits in how Google works. Last week Eric Schmidt talked to TechCrunchand noted:

“We test stuff, and when it works, we put a lot more emphasis on it.”

In the months since the launch we have seen a lot of additions to Google+ which have improved the product. Google+ got integrated in the Search Results,

Integration into the search results

When Google+ launched we immediately predicted that it would only be a matter of time before Google would incorporate Google+ in the search results as well. And they did, in different ways. Google+ posts showed up in search results, which later became official, as do the users. We saw +1 buttons in the search results, who later became less prominent and the +1-button slowly but surely spread around the web and became ‘interactive’ by first making it possible to share via the +1 button, (even though that took a while and we already had our own version) and later by even giving the readers other interesting posts on a site when mousing over the button. 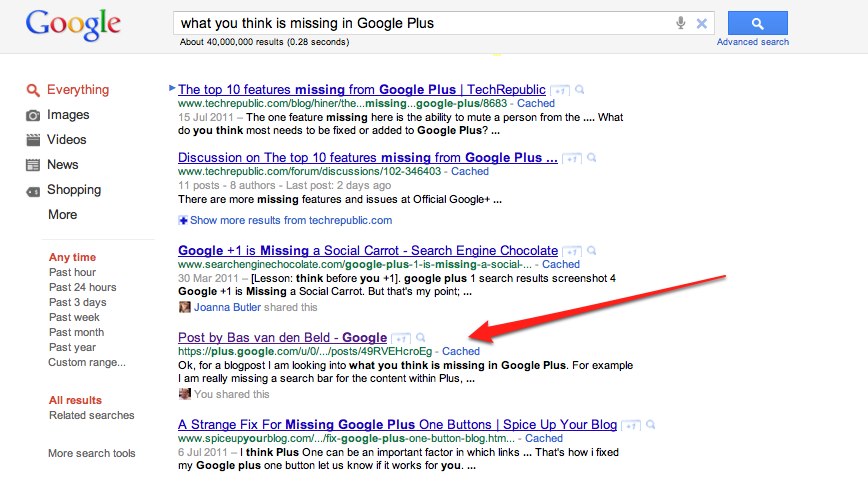 Eric Schmidt already hinted at what was coming. At the time of launch Google was not that personalized yet. Schmidt acknowledged that: “you won’t see much now because that technology is being improved right now.” But he also said: “there’s a lot coming.”
Other features which were launched in the first 14 months of Google+ were the possibility to ignore people, Google finally added search to Google+ and introduced hangouts, suggested users within the Knoweledge Graph area and the biggest change came when Google introduced Google+ for Businesses, Search Plus Your World and the connection with Google Places in Google+ Local.

So what is Google+ Really about?

It’s the title of the post so it’s about time we get to the point: what is Google+ really about then? Google+ is NOT the Facebook killer which many think (or hope) it is. Off course Google would like to ‘steal away’ people from Facebook if they could. And yes, they will be doing some very smart retargeting advertisingwith it. But the essence of Google+ lies somewhere else: its about connections, data and people. With the social part of Google+ Google is gathering more data about us so they can give us our personalized web. And the Google+ project is the ‘top layer’ of Google’s integration of all their products into social. It is the new way Google looks at the web: Google looks at your identity and acts on that. In his talk with TechCrunch Schmidt said:

That sounds a bit vague, but this is about recommendations from others. Schmidt continued:

“We’re trying to use the identity infrastructure to make the Google products really interesting. The most obvious one has to do with like You Tube recommendations search recommendations so forth, so on. We can do this based on who you are accurately and more so who your friends are.”

In a later stage Schmidt acknowledged this exact point in relation to Google+ when he said:

“Google+ is an identification management tool” Tweet this quote

Where in the past Google always looked at links and connections between sites, Google is now looking at connections between people. More links does not necessarily mean that a site is better for a specific person, but if his or her friends say it is… Google’s new way of looking at it is much more social: they offer content based not just on links but also on recommendations from your social circle. We are already seeing this with “Search Plus Your World” which gives us much more personalised and with that socialised results: 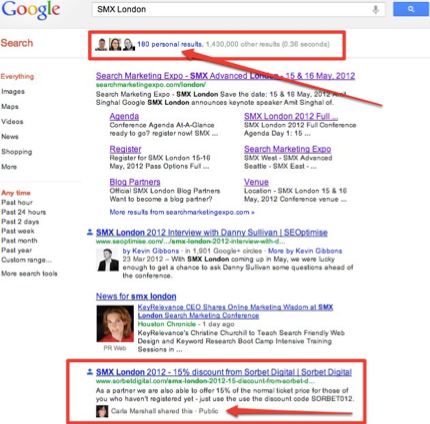 And remember this: Google is going to implement this on every single product they have, this is not a stand alone product.Again something which Eric Schmidt later confirmed:

“The assumption that everything will move over to using the Plus infrastructure over time.” Tweet this quote

The importance of data: Google+ is a data source

To make their social strategy work Google needs data. Because data helps Google to figure out what kind of information they should give you back. To TechCrunch Schmidt said:

The way they gather the data is important. And Google gets that data in different ways, some of these ways are (I’ll get more into depth about these in another post): 1. You give it to them through your behavior or what you actually tell Google 2. Google spiders the web 3. Your social circle 4. Mobile (Android!) 5. Google+ Google+. Yes, it is a data source for Google. They couldn’t get the data through Facebook, so why not get it directly from you? Schmidt already hinted on this at the D-Conference several weeks ago. There when asked about the data they couldn’t get from Facebook he said:

“Google will get social data in alternative ways”

This was before Google+ was launched…

So what is next?

We are already seeing a lot of integration of Google Products and different social elements into the Google+ structure. But we can expect a lot more. Look at the different Google products and services, figure out how they could be social and connected and you will be a step closer to understanding where Google is going. Important is to look at the bigger picture: Google will be making everything social and connected. It is a whole new way of looking at the web, looking at search and looking at social. Larry Page wasn’t kidding when he connected the Google bonuses to the Social Success of Google… The closing of specific products throughout the year shows that Google’s focus is fully on Google+.