It’s fair to say that Twitter is now a well established platform. With over 500 million registered users as of 2012, generating over 340 million tweets daily it’s become one of the most visited websites on the Internet.

Whilst of course many businesses have been active on Twitter for a considerable amount of time, I think it’s fair to say that many are struggling to gain traction there, and of course there are other businesses who have yet to dip their toes in the water. The question of what to tweet is one I’m asked frequently so that’s what I’ll be talking about today. 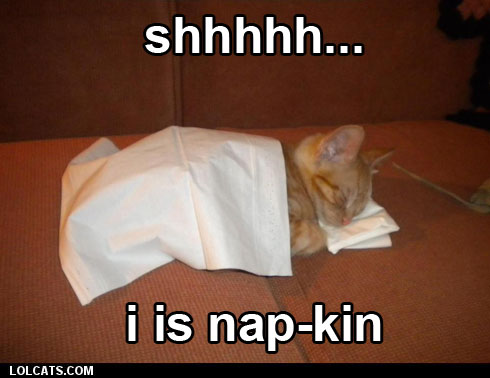 Cute cat pictures (whilst undoubtedly awesome) are not necessarily particularly well aligned with your brand and are unlikely to impress your boss. Additionally I’m guessing that they won’t necessarily help you achieve your marketing objectives.

I’m assuming that you’ve already determined your objectives in terms of what you want to achieve with Twitter, but if you haven’t then I strongly suggest that you go and do so. Additionally, whilst you’re there take some time to figure out what metrics to use to measure success and indeed what success looks like.

Back with me? Excellent.

What you tweet will likely depend on what you want to achieve (both on Twitter and indeed across all of your marketing activity); however I wanted to share some ideas here for those who are struggling to figure out where to start. But before I kick off with ideas, a quick reminder:

It’s about conversation, not broadcast

First and foremost when it comes to Twitter (and indeed any social network) you’d do well to remember that Twitter is not a broadcast platform. It’s about conversation. That holds true whether you’re tweeting as an individual or a company.

Many have highlighted that social media etiquette really isn’t that different from etiquette of regular human interaction in real life. I’m guessing you’d never show up at a dinner party and rudely butt in to other’s conversations like this:

Lady One: So we had an amazing time skiing in the Alps – the kids had a fantastic time.

Lady Two: Oh that’s great, we we’re thinking of going to the Alps next year to ski.

You: YOU’LL LOVE THIS! CHEAP SKIS! GET YOURS! www.cheapy-cheapy-skiwear.info

Yuck. Don’t be that guy.

If you wouldn’t do it in real life, then don’t do it on Twitter.  Actually, come to think of it if you would do that in real life then do your company a favour and hand back the keys to the corporate account.

It’s all about balance. It’s absolutely fine to share the occasional offer to your followers and of course share your own content, but try to keep it balanced. If you’re only tweeting your own stuff it’s likely that you fail to retain any followers and if no one’s listening then you’re not going to achieve anything. Again I’m going to use the dinner party analogy again, but you know that person who only talks about themselves? You hate them, right? They don’t get invited back places because they’re boring as hell and no one wants to get stuck with them.

There is of course an exception to this rule. If you’re using Twitter primarily as a customer service channel then of course it’s fine to post updates which are primarily about you. For example you’ll notice that train companies will post service updates. That’s totally sensible. However you’ll also notice that train companies (well the good ones at least) will be actively monitoring brand mentions on social media in addition to ‘@’ messages and responding directly to people to give them updates – so they’re conversing directly too.

Right, let’s get down to it – what should you tweet?

Fail to plan; plan to fail

You need a plan.

Sit down and create yourself a calendar so you can plan out your Twitter activity.

Additionally you’ll need to think about what else you’re going to share:

Don’t forget you’ll also need to set aside time to discover and read any other content you’re planning to share.

Create a content calendar for Twitter so it’s easy to refer to and you know what you’ll be sharing and when. This is also particularly important if there’s more than one person actually managing the account or if you happen to be sick one day and need someone else to fill in for you.

Also remember you’ll need to listen and respond to your followers and customers appropriately. I’m not just talking about complaints or questions here – if someone shares something of yours it’s good manners to say thank you. You might also consider repaying the favour and sharing something relevant of theirs at some point in the near future too.

It’s fine to schedule tweets, but do so mindfully and have a plan in place to delete scheduled tweets and/or suspend activity where appropriate.

Back in 2011 Qantas were left red faced after an ill-timed Twitter competition backfired, drawing thousands of angry responses. They invited people to enter a competition, asking people to describe their “dream luxury in-flight experience” in order to win a pair of Qantas first-class pyjamas and a toiletries kit. Somewhat stupidly, the competition was launched just a day after Qantas and its unions broke off contract negotiations and came hot on the hells of Qantas grounding its fleet, leaving thousands of angry customers stranded. Clearly that competition should have been shelved.

‘Engaging’ with followers might be harder than you think…

You can also use Twitter to ask questions and get feedback from your customers.

However, remember that when it comes to social media you are not in control. There are many examples of brands who whilst attempting to engage with their followers found themselves subject to ridicule and had their hashtags hijacked. Remember #waitrosereasons? I’m guessing this wasn’t what they had in mind: 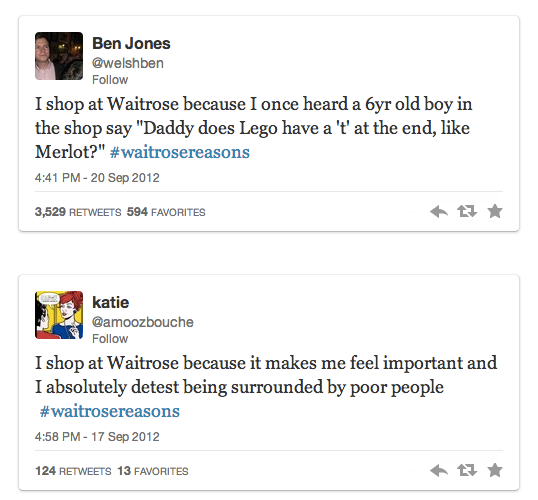 There’s been much talk around whether or not this was indeed a bad thing for Waitrose – to be honest I still can’t decide whether it was crazy stupid or genius; but regardless remember this sort of activity can backfire, and whilst some might say there’s no such thing as bad publicity think about whether or not your CEO subscribes to that belief before you leap in with both feet.

Ultimately it’s about figuring out what your followers want from you. I don’t know about you, but I want to follow accounts that:

It’s pretty easy to measure whether or not you’re hitting the mark here. Look at how many clicks the links you’re sharing get. Look at retweets. Look at @ replies. Figure out what seems to resonate and what doesn’t, drop the stuff that doesn’t and try new approaches.

Got some other tips to share? Do let me know via the comments.