But a study performed by Pagelever shows something interesting: the two are also connected to each other in a way that they need each other. Social Media activities trigger search, but more importantly: search triggers Social Media. The study shows that 27% of Facebook’s referrals come from… Google.

PageLever looked at a 1000 fanpages to see how much referrals came from the search engines Bing, Yahoo and Google and how much came from YouTube. Here are the results: 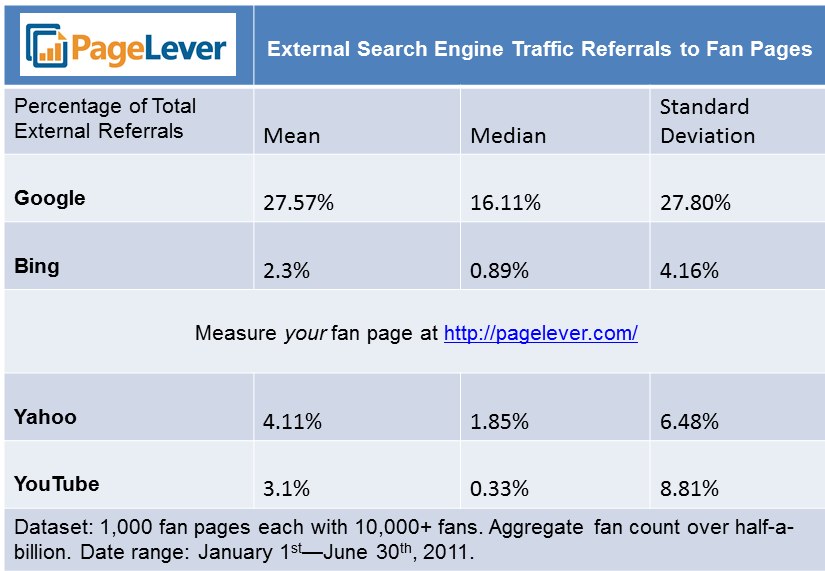 It shows that Google is by far the biggest driver of referrals for Facebook pages, followed by YouTube. Yahoo and Bing give back much less referrals. As for Bing that is a bit surprising, since Bing and Facebook have a deal together. Google however sends ten times more referrals than Bing does.

Can we trust the research?

An important question always is: can we trust this research? Like with all data you have to be careful. As said, it is ‘only’ a subset of 1000 fanpages, which all had 10.000 fans or plus. And PageLever only looked at Google, Yahoo, Bing and YouTube. And PageLever is looking to promote their measurement tool (which is working ;). Also what is important is that you don’t look at the numbers as traffic, but referrals.

PageLever did look at raw data coming from Facebook trough their API. So the data comes directly from Facebook. All in all it looks like a nice research which can give you an indication of what you could do and how people respond.

Does this mean optimization for Bing and Google of your Facebook page is important? Yes it does. Optimizing your page by using the right keywords, getting enough links and getting it shared throughout the web really will help getting your Facebook pages noticed in the SERPS. Which can eventually drive a lot of traffic if done right.

What is also interesting is the amount of referrals which YouTube is sending Facebook. That can really be an interesting piece of optimization. For example by adding your Facebook-page to all the descriptions or by mentioning your Facebook page in the video itself.

By the way: did you see and “liked” our Facebook page? 🙂