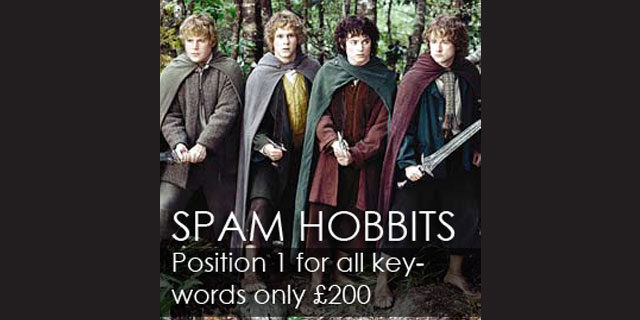 Why doing a little SEO is worse than doing no SEO

It’s hard not to constantly look to the future, our industry changes so rapidly and so dramatically that the next big thing could pass you by in the blink of an eye, without you even knowing about it. The SEO industry has come a long way over the last decade or so, and we’re almost free of the “spam-hobbit” reputation. I say almost because, let’s face it, the majority of people outside of the industry either have no idea what SEO is, or think that we spend our days writing spam comments and “clicking on results in Google until it goes to the top of the results” – if only it was that easy, seriously. On the flip-side of the coin, modern business owners are beginning to appreciate the amount of work and skill that goes into creating a successful SEO campaign. Some even understand just how vital it is to have the right SEO team behind them if they are ever going to compete in the world of online business.

The problem, however, is that whilst the majority of us SEOs are working hard to build a respectable industry and improve the way we are perceived, there are still many people and organisations out there that are doing little to brush off the tired old clichés. Greedy, money-hungry “SEO experts” that are willing to take honest people’s money  in return for half-assed services, spread  so thinly over such long periods of time that their work is written off before they even start. But what does it matter? They’re getting paid and the customer can always find another “forward thinking SEO agency” or “cheap freelancer” to get the job done, can’t they?

Well, yes. They can, and that’s what they do. All too often businesses go from one bad SEO provider to the next until they finally decide that “this SEO nonsense doesn’t even work”. Not only will they give up on SEO themselves, they’ll also tell their friends, who own other companies, that SEO is a waste of money. And guess what, eventually it’s going to bite us all in the backside.  Ironically, a whole industry can’t survive on high rankings alone. Reputation, transparency, dependability and cold hard results are needed to keep things moving, to attract new business and to keep the industry fresh and alive. I know there are charlatans in every industry but I’m worried that there are too many people in the SEO industry that are cocking things up for the rest of us.

Don’t feel you are helping your client simply because you don’t charge them very much money.  If a client has £1000 to spend on SEO, don’t take it unless you know that you can provide them with the results that they want and need for their money. Be honest with yourself and with the client. And when needed, just say NO.  Say it loud and say it proud. A common scenario is when a company decides they need to start investing in SEO services but have little knowledge of how it works and zero experience.

The all too common scenario

Let’s assume Mr Mattress wants help with his site that sells mattresses. He comes to you and says “I know it’s a competitive keyword, but I am only willing to pay £500 a month. If you can prove this SEO stuff works, then, and only then, I will up the budget and we can really get things moving.”

First of all, we need to look at the business model – what is the ROI? What is the search volume for ‘mattresses’? If he got to position one (which he isn’t going to on his tiny budget) would it be financially worth the investment to get him to there?

If you know it’s going to take a budget of £5000 to get him near the top of the SERPs then you need to say so. It’s simply pointless taking him on as a client if he isn’t willing to invest the money needed. If you agreed to his idea of starting with £500 a month, guess what could happen? You could fail to provide results and he’d give up on the idea of investing more money. If anything it’s better to use the maximum budget in the beginning of the campaign to get things moving and then drop it down a peg to maintain it once you’ve achieved the desired results.

“No, I can’t get 20 keywords to position 1 for £500 a month. No, it’s not possible to optimise two sites for the price of one, because it won’t generate results and it will be a waste of your money!”

People need to stop being greedy and, instead, think of the bigger picture. Saying yes to tiny budgets, when you know that you can’t meet the objectives is bad for everyone, not just the client. For the love of SEO, just say NO! The future of our industry depends on it.