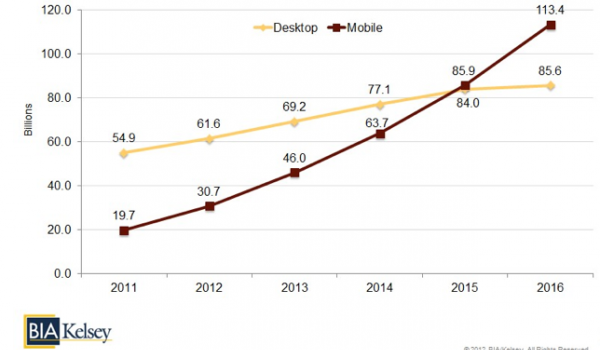 Over the last couple of years we have seen the search engine landscape take a significant turn. Both the major players – Bing and Google – have increasingly turned scaled their mobile/tablet hardware options. Google in particular have been hugely successful with the launch of a number of hugely successful range of tablets using the Google tablet operating systems and the recent acquisition of Motorola Mobility.

Recently also we have seen Microsoft come to the table with a more serious competitor to the Apple and Android based alternatives – and one which has started to see fruition in the market with Microsoft now providing a serious alternative to Blackberry maker RIM in particular (recent figures – September 2012- suggest market share may be as high as 10.4%. As a sidenote Google dominate with around 62.4%, with iOS coming in at around 14%).

Apart from the obvious financial benefits of significant mobile market share, one of the other reasons both parties have turned to mobile and tablets is to maximise the wider commercial opportunities that exist within the online marketing marketplace. With mobile searches expected to overtake those on desktop, the opportunity through mobile is likely only to get bigger – and with 4G on the way – and concerns around online safety likely to lessen one can only assume revenue via mobile is likely to increase significantly as well. I should add that one of the biggest features of the new platform is the consistency between the mobile, tablet and desktop interfaces, something that in the modern day lifestyle of multi device usage is likely to resonate well with potential customers. That said sales of Windows 8 for desktop have been slow – and one can’t help thinking much of the mobile and tablet success may be dependant on Windows 8 really catching on the coming months.

Interestingly however and particularly in the UK we have continued to see Bing continue to take market share – and in a more marked fashion over recent months. When one looks at the increases the search engines have taken over the last couple of years, one would suggest the Search Alliance is working – with Bing in particular starting to break into the search marketshare of Google. Certainly the study I did back in July 2012 on Holistic Search suggests that Google’s market share has fallen by around 2% during the last 24 months. In July, Hitwise recorded Google’s market share as being around 90.7% – that figure has fallen below 90% for the first time in around 5 or so years. According to Hitwise, searches for Windows 8 were up 120% on September alone – which helped increase their market share by 0.72%. Further to this that increase has come at the expense of Google rather than partner Yahoo – which suggests a significant step change for Bing. 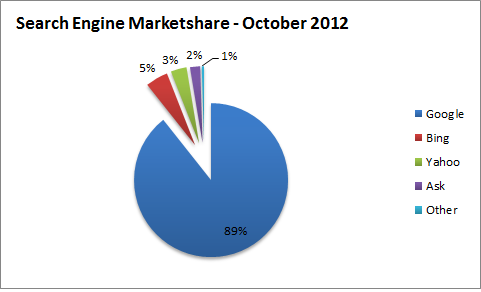 When one now comes back to my earlier point on mobile. Google are by far the dominant player in search, dominant in mobile and now making a play for the desktop landscape through their Chromebook range. Increasingly we are seeing a very blurred line between desktop operators and mobile operators – rather than the segmented landscapes of yesteryear. That ultimately cannot bode well for embattled RIM for the long term. Further to that one would suggest that unless Apple maintain that brand advocacy the opportunity for Microsoft in particular to take market share is significant (That said the two are like chalk and cheese so I would suggest any change in market share would not be due to one ditching their handset directly for the other) – but Microsoft is slowly but surely getting its ducks lined up – and one can’t help thinking if they can tie the XBOX into the whole thing we could just see them really come to the table on all four.

Whilst by no means is this game set and match Microsoft but credit where credits due. The 0.72% increase seen last month – should it continue could really start impacting particularly the search marketing landscape – where many paid and organic search campaigns are heavily tailored towards Google – and its nuances. Should that picture change significantly we may well see a more interesting framework for marketeers to work in and at last provide Google with some room for thought. That can only be good for the search industry – where we have had that monopoly in play for such a long time.