Skip to content
Home » Articles » Uncategorized » UPDATE: Official: Yahoo To Lay Off 2,000 and Being Sued: A Facebook SetUp? UPDATE: Official: Yahoo To Lay Off 2,000 and Being Sued: A Facebook SetUp?

Update: Yahoo now officially announced it will indeed be laying off 2,000 people.

According to Kara Swisher of AllThingsD, who is usually very well informed, this week could be a week of major changes for Yahoo. One of the older search brands in the industry is supposedly making a lot of changes, starting with about 2,000 lay offs in the next few days.

Is this the end of Yahoo as we know it? Will the company be restructured or will there be a maybe surprising other move, like a sale? At the same time as Yahoo is having its own issues they are being sued as a counter reaction by their partners Facebook over patents. To say that Yahoo is in rough waters in an understatement.

A few years ago Yahoo was the center of attention when both Google and Microsoft tried to buy the former search giant. This ended not with a sale but with a partner deal with Microsoft. This deal was made by the Yahoo CEO Carol Bartz who has always been a source for news, because there was always something going on.

With her departure things seemed to have calmed down, but behind the scenes her CEO successor Scott Thompson is as busy or busier than Bartz restructuring the company. According to AllthingsD this will result in 2,000 lay offs this week. And that is just the start.

Swisher reported before that “Thompson had told employees in memos and also in recent meetings that “real change” was coming to the company.”. Next to the lay offs Yahoo reportedly will be restructured and will be getting “several major, soup-to-nuts units at the company.”

According to Swishers sources Yahoo will be divided in a global media division and regional sales as well as a small organization with about 50 employees who will be focussing on future innovation.

The innovation is an interesting part, because that could suggest that Yahoo is not planning on selling. After all, why would they start innovating if they want out? Just recently we saw the news that Yahoo was still working on search innovations when the “Search Science Team” developed elements which would make news more personal.

Again, this would suggest that Yahoo is planning on making big steps themselves. But there is more going on which triggers the mind…

About three weeks ago I reported that Yahoo had made a radical move, they are suing Facebook, one of their partners, for patent infringement. I then suggested this could have something to do with Facebook’s IPO. Yahoo might want money out of this, which could help them in the rough times they are going through now.

But not unexpectedly Facebook didn’t just accept and is now filing a counter-claim of its own, saying Yahoo is the one infringing a wide range of patents owned by Facebook. Some of which are focussed around advertising, which makes Yahoo the money they so desperately need.

So Yahoo seems to have gotten themselves in a difficult situation. Unless…

At the same time all of this is going on Facebook is working on the improvement of their on site search engine. It won’t mean Facebook will go into search, but they now do seem to understand they have to do something with it.

It has been seen in business before that lawsuits, the ‘cleaning up’ of companies and major lay offs come before big changes, not changes within the company, but changes as in take overs.

What if all of this is a ‘dance’ between Facebook and Yahoo which will in the end turn out to be a set up for a take over or more closer cooperation? As said before, it would make sense and wouldn’t surprise me if the next step for Yahoo is Facebook. Mark van Leeuwen
Many agencies struggle with cash flow and profit. The answer lies in KPIs and how they truly can drive agency...
Read More 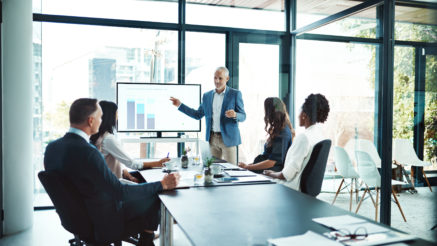 Data-Driven SEO as a Business Cornerstone

OnCrawl
SEO can be hard to sell as a core business unit, but that shouldn't be the case. Data-driven SEO contributes...
Read More
Join our 9,000+ Subscribers
Receive daily, weekly or monthly updates on our latest content